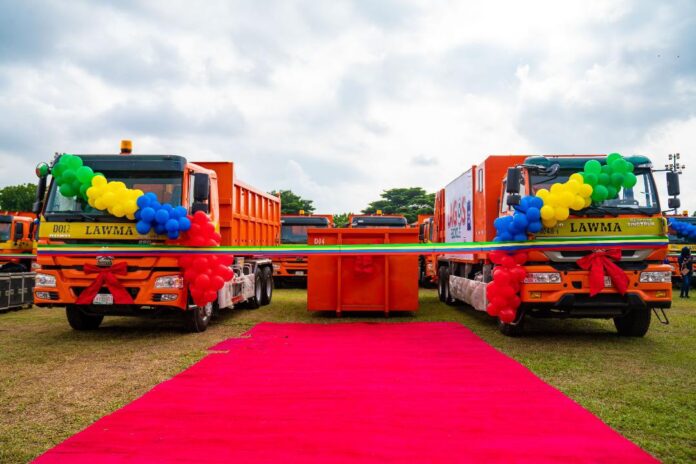 Lagos State Governor, Mr. Babajide Sanwo-Olu, has disclosed that the State Government has expended over N2 billion on the rehabilitation of dumpsites across the state, while an investment worth N1billion is currently on-going in the construction of three new transfer loading stations.

The Governor made the disclosure on Wednesday, at the State House, Ikeja, during the unveiling of 102 brand new compactor trucks and 100 double dino bins for use by the Lagos State Waste Management Authority (LAWMA). 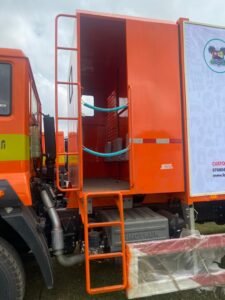 Governor Sanwo-Olu whose administration hit 798 days on Wednesday, about 55 percent of the first four-year term, said the unprecedented feat is to fulfill the promise of the Administration for Lagosians to experience improved waste management. 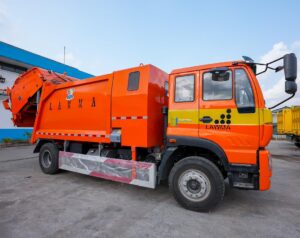 He mentioned that the determination has necessitated the investment of more than two billion naira towards the rehabilitation of dumpsites across the state.

“Another one billion naira is currently being invested in the construction of three new transfer loading stations to provide the necessary infrastructure to facilitate the effective delivery of solid waste management services,” he said.

The Governor who mentioned that the equipment will enable LAWMA to become more effective in fulfilling its mandate on behalf of the people of Lagos, said the development is a testament to his “administration’s determination to secure the public and environmental health of the State, as well as to improve the aesthetic value of our environment.” 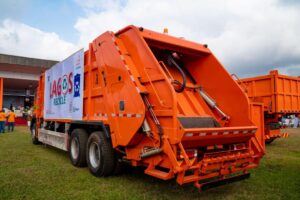 According to him, the promise was to empower LAWMA “to effectively drive the elimination of waste accumulation in Lagos and adoption of recycling state-wide; as well as to harness the potential for job creation and other opportunities in waste recovery, reuse, repair, remanufacturing and materials innovation.”

“You will recall that, on assumption of office two years ago, one of the first things I did was visit the Olusosun Landfill in Ojota. This visit was not accidental.

“We were and still remain determined to rewrite the narrative of waste management in Lagos State, for the better,” he said.

According to him, the investment which is unprecedented in the State would drastically bring about very visible improvements in waste evacuation and reduce the incidence of blackspots that blight roads and clog drains around the metropolis. 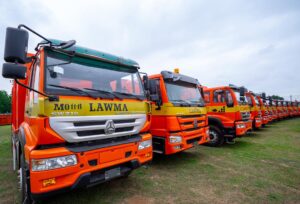 “This represents one of the largest singular investments ever in the waste management sector in the State. We are confident that the addition of these new assets to our existing ones will very quickly bring about very visible improvements in waste evacuation and reduce the incidence of blackspots that blight our roads and clog our drains.

“But this is only the beginning. We are thinking well beyond the basics of waste collection and disposal.

“We are equally focused on permanently changing the habits and mindsets of Lagosians regarding the management of waste; inculcating a culture of responsible usage, and of sorting and recycling,” he said.

Speaking on the potentials of waste to driving a green economy, he said: “We are also fully aware of the potential of the waste economy. Our waste-to-wealth plan is taking shape, as we are rehabilitating the compost facility in Odogunyan and will be unveiling more projects/programs in the coming months.” 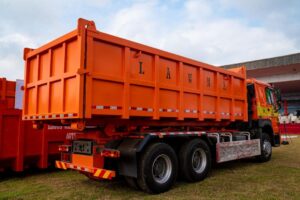 Governor Sanwo-Olu who said the intention of the investment was not to disenfranchise the Private Sector Participants (PSPs), stated that: “I am therefore pleased to announce that, among other things, we will shortly be rolling out a program to assist PSPs to renew their waste collection fleet. 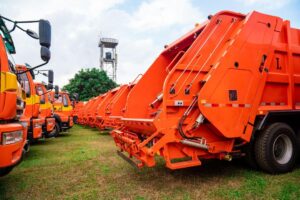 “That is the basis of this new investment in equipment. So, let me reiterate, we are not competing with the PSPs; instead we are joining hands with them to ensure that every part of Lagos enjoys full and effective waste management coverage.”

Commending LAWMA, he called for stronger performance and dedication to duty by the stakeholders, including truck drivers, motor boys, street sweepers, dumpsite workers, mechanics and technicians, equipment operators, and others, charging them on nurturing appreciable responsiveness and maintenance culture in the use of the equipment.

“The work you do is not a glamorous one, and often goes un-noticed, but it is crucial to the efficient functioning of the State.

“I want to charge you all to not just keep up the good work but also to redouble your efforts. I assure you that this government will continue to support you all the way.

“Crucially, and this goes to all LAWMA staff, ‘To whom much is given, much is expected’. I am entrusting these new implements to your care; they must be put to good use, they must be handled responsibly and well-maintained, and Lagos must be made clean and kept clean!,” he said.

He however, called on residents of the State to become civil by cooperating and collaborating with PSP oeprators, ensuring they promptly oblige to paying fees for waste disposals.

Calling for responsiveness, he said: “In the course of our daily lives we all generate waste and must take responsibility for the waste we generate. We must act like responsible citizens at all times.

“We cannot continue to litter our roads, dump waste on the roadside or in illegal dumpsites, or patronize cart-pushers for waste disposal.

“It has been said that one definition of insanity is doing the same thing and yet expecting a different result. We cannot be irresponsible in our waste handling and disposal behavior and somehow expect that we will be spared the consequences of irresponsibility.”

In his remarks, the Managing Director, Lagos State Waste Management Authority (LAWMA), Mr. Ibrahim Odumboni, commended the efforts of the Administration, mentioning that despite challenges posed by the COVID-19 pandemic, there has been massive investment in waste management in the State.

According to him, the trucks which were designed by the engineers of the Authority, with user-friendly system, will be distributed to all the 57 Local Governments/Loal Council Development Areas in the State.

He mentioned that the development will change the narrative of the Authority which has faced acute shortage of compactor trucks, to do critical intervention assignments, amidst increasing waste generation on daily basis.

“In the midst of our struggle, Mr. Governor came with a promise, that brand new compactor trucks would be delivered to us, sooner that we expected. Alas! here we are today,” he said.

He mentioned that owing to the fact that no less than 15,000 metric tons of solid waste, is generated in the state on daily basis, with a population of over 20 million people, “the challenge necessitates, that LAWMA has an impressive truck fleet to cope effectively.”

In his remarks, Mansur Ahmed, who represented Aliko Dangote, the President, Dangote Group, applauded the State Government for booting local content in the State.

He said that the partnership with Sinotruk was a reflection of the State moving towards developing the economy by local partnership, stating that “while other states are talking about local content, Lagos is practicing local content.”