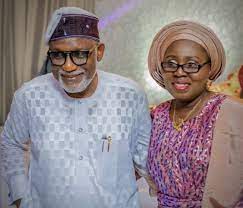 The All Progressives Congress (APC) in Ondo State celebrated Akeredolu and wife on their birthday and described Gov. Oluwarotimi Akeredolu as a catalyst for development and uncommon transformation.

Mr Ade Adetimehin, State Chairman, stated this in a birthday message to the governor on Wednesday in Akure.

“I consider all the bold and giant strides of the legal icon for the betterment of Ondo State in the last few of years and submit that Arakunrin deserves accolades from every resident of the state as he clocks 65 years,” he said

The party chairman also rejoiced with the governor’s wife, Mrs Betty Anyanwu-Akeredolu, on her birthday, and commended her for promoting the cause of women and empowering them through a series of rewarding pet projects.

“On behalf of the state chapter of APC, I celebrate the APC leader and governor, and the First Lady, Arabinrin Anyanwu-Akeredolu, as they celebrate their memorable birthdays.

“The party is grateful to the Almighty God for His endless mercies upon the governor, especially for keeping him alive and using him as a catalyst for the immense developmental strides that dot our landscape since Arakunrin came in the saddle, “he stated.

Adetimehin said that every sector of the state, particularly agriculture, health, education, social and infrastructural development, boldly attested to the governor’s uncommon foresight.

The chapter noted that the focus of the APC-led government development agenda was hinged on the governor’s passionate concern to erect enduring legacies in the state.

Adetimehin prayed that God, in whom the Ondo State First Family had absolute faith and trust, “would grant the governor and his wife long, blissful and healthy sojourn on earth.”

Report states that Akeredolu clocked 65 on Wednesday, while his wife clocked 68 on Tuesday, July 20.