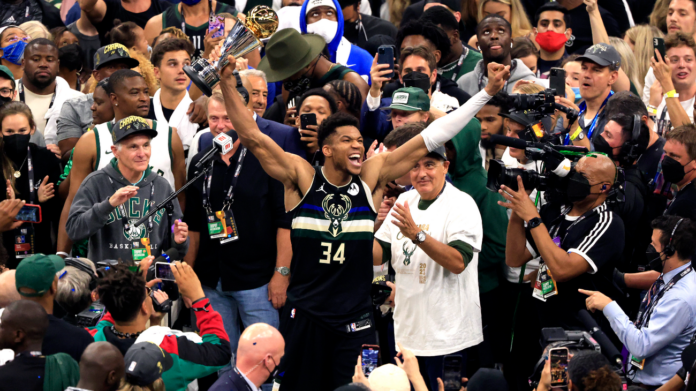 Giannis Antetokounmpo has produced a performance for the ages to lead the Milwaukee Bucks to their first NBA title since 1971 after a 105-98 win over the Phoenix Suns.

The Greek forward scored 50 points with 14 rebounds and five blocks in a monster Game 6 performance on Tuesday.

It included a 20-point third quarter after the Suns charged back in the second.

Antetokounmpo’s haul was his third 40-plus-point display in the NBA Finals, while he reached 20 points in a quarter for the second time in the series.

It is a feat which had not been achieved since Michael Jordan in 1993.

The 26-year-oldnshook off his demons to be exceptional from the free-throw line with 17-from-19.

He also becomes only the seventh player in the history of NBA Finals to have a 50-point game.

It came as no surprise as Antetokounmpo was named most valuable player (MVP) of the NBA Finals after a heroic series.

His achievement is more remarkable given he overcame injury after he hyper-extended his knee in the Conference Finals.

Middleton came through with some key late buckets, finishing with 17 points, while Holiday had 12 points, nine rebounds and 11 assists.

Veteran Suns guard Chris Paul scored 26 points with five assists, while Devin Booker’s shooting radar was off, with 19 points at 36.4 per cent from the field.

Antetokounmpo was the lead act as the Bucks ended their half-century wait for an NBA title.

He helped Milwaukee get off to a flying start with a 29-16 opening quarter at the Fiserv Forum.

Bobby Portis provided early support with 10 points as Holiday struggled for offensive impact, before the Suns responded with an 8-0 second-quarter run to lead 47-42 at half-time.

Phoenix led by as much as seven points early in the third quarter but Antetokounmpo was at the forefront of the Bucks’ response, with a memorable 20-point period.

The Suns got as close as four points with less than 90 seconds remaining after Jae Crowder’s pair of free-throws.

But Middleton’s jumper followed by a duo from the stripe sealed victory for the Bucks.