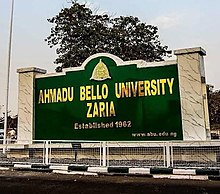 Ahmadu Bello University (ABU), Zaria in Kaduna State will present a total of 35,758 graduands for the 2018/2019 and 2019/2020 sessions for conferment of first degrees, postgraduate diplomas and higher degrees at its 42nd/Diamond Jubilee Convocation billed to hold on Saturday, 28th January, 2023.

The number, released along with other activities lined up for the convocation by the institution’s Registrar, Malam Rabiu Samaila, comprises the following:

In a statement issued by the Director of Public Affairs, Auwalu Umar at the weekend, he said four outstanding personalities will be conferred with the institution’s honorary doctorate degrees for their immeasurable contribution to humanity.

The Visitor to Ahmadu Bello University, His Excellency, Muhammadu Buhari, GCFR, the President and Commander-in-Chief of the Armed Forces of the Federal Republic of Nigeria, will be the Special Guest of Honour at the occasion.

While, His Excellency, Malam Nasir Ahmed El-Rufai, OFR, the Executive Governor of Kaduna State, will be the Chief Host, while His Highness, Malam Ahmed Nuhu Bamalli, CFR, the Emir of Zazzau, will be the Royal Father of the day.

There will be a pre-convocation lecture scheduled to hold at ABU’s CBN Centre for Economics and Finance Auditorium at 4pm on Friday,  27th January, 2023.

The lecture, titled “The Impact of Man-Made and Natural Disasters on Food Security and Agricultural Development in Nigeria,” will be delivered by Mr. Boss G. Mustapha, CFR, the Secretary to the Government of the Federation. Mr. Hubert Wigwe, CON, the Managing Director, Access Bank PLC, will chair the lecture presentation.

Other activities lined up for the convocation include a public lecture scheduled to take place on Tuesday, 24th January, 2023.

The lecture, which is to be presented by an alumnus of Ahmadu Bello University, Prof. Adebayo Olukoshi, will hold at the institution’s CBN Centre for Economics and Finance Auditorium.