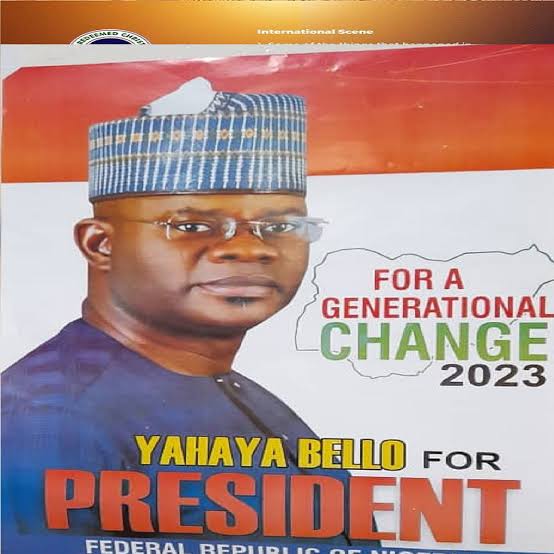 Almost two years away to the 2023 general elections, posters convassing support for Presidential bid of Governor Yahaya Bello’s of Kogi state have flooded part of Ilorin, the Kwara state capital

The posters with portrait of the Governor, who clad in blue Babariga with a blue cap to match, were pasted under the bridge of post-office and Unity Areas of Ilorin.

Though Yahaya Bello is a member of the rolling All Progressives Congress (APC), no party logo was indicated in the posters sighted.

The posters were at the instance of the Kwara state chapter of GYB Presidential volunteers Alliance Group.

The group in the posters, sought for Kogi Governor to clinch the presidential seat, in the 2023 polls for what is listed as gender equality, security enhancement, yought and manpower development among others.

Nigerian NewsDirect Correspondent reliably learnt that the Speaker House of Assembly, Mr. Mathew Kolawole, and his team, few weeks ago visited Kwara State House of Assembly to mobilise support for the presidential ambition of his governor.

Kolawole informed the honourable members that they are in the state to mobilise for the support of Governor Bello to emerge as next president due to some attributes in him, as well as, his contribution to the development of Kogi and the nation since his election as Governor.

He noted that the governor had succeeded in addressing insecurity climate in the state, which was prevalent prior to his emergence.

He urged other zones in the country to concede the presidential ticket of the APC  to Kogi Governor, saying that the nation is in safe hands if given the opportunity.