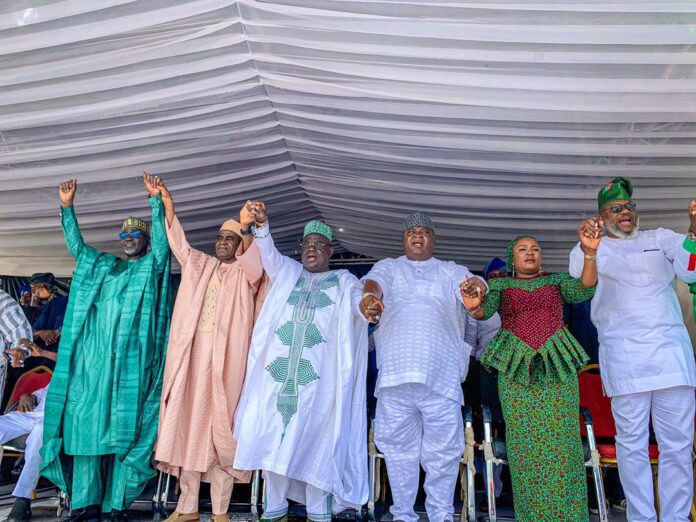 …declare ex-Vice President as most competent to lead Nigeria

Three former governors and leaders of the Peoples Democratic Party (PDP), on Monday stormed Abeokuta, the Ogun state capital, to declare support for the Presidential candidate of the party, Atiku Abubakar ahead of the 2023 elections.

No fewer than 20 volunteer support groups had thronged the party secretariat in Abeokuta for their declaration of support for Atiku, Ladi Adebutu, the governorship candidate of the party and other candidates.

Aliyu while addressing the crowd of supporters, insisted that Atiku remains the healthiest candidate among those vying for the presidency.

He insisted that, Nigerians know the candidate who is mentally and physically capable of ruling Nigeria.

“I was looking through newspapers today and I saw a picture of somebody trying to prove he is healthy. If there is health, we don’t need to tell people that we are healthy, but we are aware that Atiku is the healthiest of the presidential candidates in this country”, Aliyu said.

He noted that, only Atiku can rescue Nigeria from Boko Haram, bandits and other security challenges confronting the country.

“The economy is bad, there is extreme poverty in the land, therefore, members of PDP and fellow Nigerians, on the day in February, elect Atiku Abubakar because the development of any nation depends on the education of that country.

“You have seen what has happened to us, today our students in the public universities have been at home for more than seven, eight months. Our secondary schools many of them are so dilapidated that they cannot serve as secondary schools. Our elementary schools, there is no country that has over 20 million children out of school and you expect to be developed, only an Atiku Abubakar presidency can help us solve this problem.

“We have become the poverty capital of the world, that should not be. We are expected to everyday produce 2.1 million barrels of crude oil, but only last month, we were able to produce 900,000, it has gone as low as 600,000.

“What is happening to the rest? Some people are stealing it, are we saying that the current government does not know those who are stealing it? They know, therefore, voting for Atiku Abubakar is saving, is rescuing, is developing Nigeria”.

In his address, Adebutu urged the South West to support Atiku’s candidacy, saying “PDP is the party that can take you to the mainstream of Nigeria.”

He said “Before the primaries, I told people that for the peace of Nigeria, let us all support Atiku Abubakar, some people were adamant, they insisted that it was the turn of Yoruba, but I told them Yorubas have ruled previously.

“But some people because of their selfish interest don’t want Atiku to emerge as our candidate. You cannot lose your integrity because of a pot of porridge.

“I believe in one Nigeria. All those calling for the break up of Nigeria cannot withstand the destruction of war. We don’t want war, we cannot afford to be refugees, what we want is peaceful resolutions of our problems.

“We have to move away from the concept of breaking Nigeria, we will not divorce, our children will not suffer.

“Even the countries that have stronger institutions than us cannot not afford to break up.

“From the recent developments, it has shown that Atiku is a true leader, he has put himself in the position of a true elder. We want an elder that can rebuild the party and the country.”