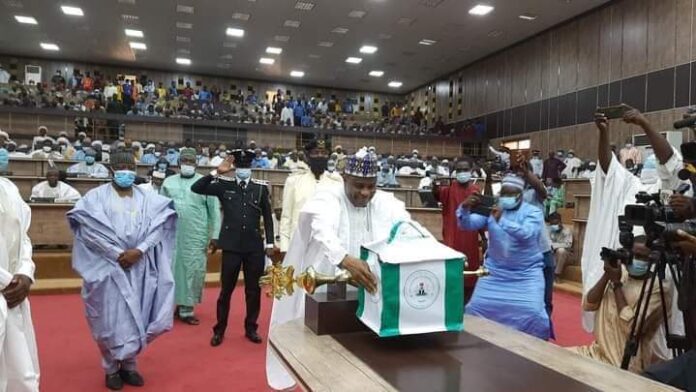 Gov. Aminu Tambuwal of Sokoto State on Monday presented the proposed 2023 Appropriation Bill of N198.5 billion to the State House of Assembly.

Tambuwal said the 2023 budget is in consonance with the existing budgetary standing and prevailing fiscal realities as contained in the State Medium Term Expenditure (MTEF) and glaring evidences.

“The increase in the Budget Proposal is attributed to the actual revenue collection of the current year and realistic anticipated increase in capital receipts.

“In all, we are modest in our projection of various sources in line with prevailing realities and the realistic budget principle,” he said.

“It also had aid and grants amounting to N74.7 billion and capital development fund of N24.5 billion on the proposed Capital receipts.

Tambuwal added that the 2023 Budget reflects a continuation of priority focus on critical aspects of development, with allocation to sub-sectors.

“Other allocations include Water with N4.3 billion, environment N4.1 billion and other functions N116.9 billion.

“Capital Expenditure is 58.9 per cent while Recurrent Spending is 41.1 per cent of the total budget. It will accord priority to the completion of ongoing infrastructural projects and the legacy projects started by this Administration,” he added.

He appreciated the Sultan of Sokoto, Alhaji Sa’ad Abubakar, traditional and religion leaders and the entire people of the state for the support accorded to his administration.

Tambuwal solicited the collaboration of the state Assembly members towards the realisation of his transformation drive, through the execution of people-oriented projects in the state.