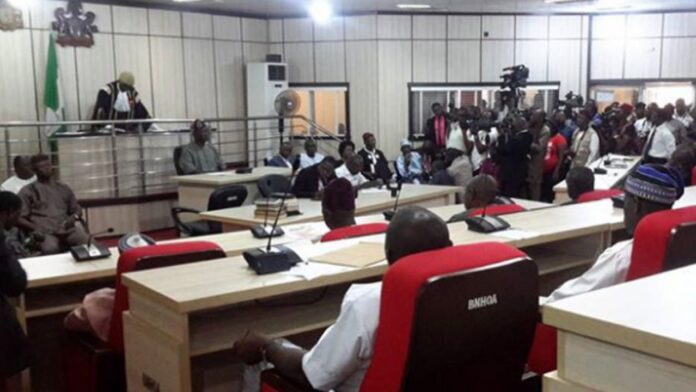 The Benue House of Assembly on Monday approved a request of 23 local government areas in the state to access an overdraft of N2 billion from Fidelity Bank Plc.

The approval came after a letter of request by Gov. Samuel Ortom was read by the House Deputy Speaker Christopher Adaji during plenary.

The letter stated that the request by the 23 local government areas for an overdraft facility of N2 billion from Fidelity Bank Plc. was to supplement incomes from the Federation Account
Allocation Committee so as to meet some critical statutory needs of the areas.

The letter partly read “Mr Speaker is already aware of the existing funding gap that has made it impossible for local government areas to meet statutory obligations of local governments and the responsibility of the Benue State and Local Government Joint Account Allocation Committee to source for funds, including overdraft for the efficient management of council areas.

“Mr Speaker may also be aware of the requirement by banks for the local government areas to now obtain both Executive Council Approval and State House of Assembly Resolution to be able to access credit facilities from banks and other financial institutions”.

Ortom, therefore, appealed to the house to grant the request to enable the 23 local government areas to access an overdraft facility of N2 billion at an interest rate of 25 per cent for 90 days from Fedelity Bank Plc.

He informed the house that the repayment of the overdraft facility shall be from statutory income flow from the Federation Account to thelocal government areas.

Contributing to the matter, the Majority Leader of the House, Mr Damian Cheme (Gwer West/PDP), Mr Peter Onche (Obi/PDP) and Mr Jacob Orban (Logo/PDP), said “when the overdraft is accessed it would aid the local government areas to clear the backlog of salary arrears and carry out other critical assignments”.

In a unanimous resolve, the house granted the request.