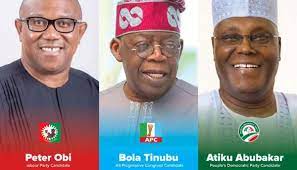 Amidst Independence Anniversary holidays from Saturday till Monday (yesterday), the two major leading political parties in Nigeria’s political space, the ruling All Progressives Congress (APC) and the main opposition, the Peoples Democratic Party (PDP) stormed the Southwest with campaign activities ahead of the 2023 General Elections.

This is just as the Labour Party did not stay away from campaign activities over the weekend in the Southwest.

Recall the Independent National Electoral Commission (INEC) had fixed September 28 for the formal commencement of the presidential campaigns.

Although, the two major political parties, APC and PDP, are amidst internal wrangling over differences and campaign disputes, these didn’t stop campaign activities which took strategic concentration in the South-west between Saturday and Monday (yesterday).

For the ruling party, women supporters in their large number on Monday, shut down vehicular movement across Lagos metropolis as they stormed various parts of Lagos, marching in support of the presidential candidacy of the APC’s Asiwaju Bola Tinubu/Kashima Shettima.

The women who also drummed support for the second term bid of Lagos State Governor, Babajide Sanwo-Olu and his Deputy, Dr. Femi Hamzat were full of enthusiasm expressing confidence in the candidacy of the aforementioned.

The rally tagged: “Lagos Women Support Walk for Tinubu/Shettima, Sanwo-Olu, Hamzat,” was organised by the office of the Women Leader, Lagos APC, Lagos, under the leadership of Mrs. Jumoke Okoya-Thomas.

Led by Sanwo-Olu and his Deputy, Hamzat, wife of the governor, Dr. Mrs Ibijoke Sanwo-Olu, wife of the deputy governor, Mrs. Oluremi Hamzat,  the women rally covered some selected areas of the metropolis.

The women who were spotted in different colour T-Shirts with Tinubu’s insignia, chanted various solidarity songs in support of Tinubu/Shettima Presidency in 2023.

The large turnout led to traffic gridlock as motorists were forced to slow down to navigate through narrow lane left for movement.

The group of women came out in large numbers as they marched through the Lagos Island, CMS and other areas and terminated at Mobolaji Johnson Arena, formerly Onikan Stadium, Onikan, singing and hailing APC Presidential candidacy of Tinubu/Shettima.

Walking through major streets and highways in Lagos, the women were chanting solidarity songs, saying Tinubu is the best choice among the Presidential candidates set for the 2023 general polls.

Meanwhile, three former governors and leaders of the PDP, on Monday stormed Abeokuta, the Ogun state capital, to declare support for the Presidential candidate of the party, Atiku Abubakar ahead of the 2023 elections.

No fewer than 20 volunteer support groups had thronged the party secretariat in Abeokuta for their declaration of support for Atiku, Ladi Adebutu, the governorship candidate of the party and other candidates.

Aliyu while addressing the crowd of supporters, insisted that Atiku remains the healthiest candidate among those vying for the presidency.

He insisted that Nigerians know the candidate who is mentally and physically capable of ruling Nigeria, noting that, only Atiku can rescue Nigeria from Boko Haram, bandits and other security challenges confronting the country.

“The economy is bad, there is extreme poverty in the land. Therefore, members of PDP and fellow Nigerians, on the day in February, elect Atiku Abubakar because the development of any nation depends on the education of that country.

“You have seen what has happened to us. Today, our students in the public universities have been at home for more than seven, eight months.

“Our secondary schools many of them are so dilapidated that they cannot serve as secondary schools. Our elementary schools, there is no country that has over 20 million children out of school and you expect to be developed; only an Atiku Abubakar presidency can help us solve this problem.

“We have become the poverty capital of the world, that should not be. We are expected to everyday produce 2.1 million barrels of crude oil, but only last month, we were able to produce 900,000, it has gone as low as 600,000.

“What is happening to the rest? Some people are stealing it. Are we saying that the current government does not know those who are stealing it? They know, therefore, voting for Atiku Abubakar is saving, is rescuing, is developing Nigeria.”

Also addressing the gathering, Haruna said, “I want to appeal to you to join us as you make a commitment towards the primaries to support him and you delivered.

In his address, Adebutu urged the South West to support Atiku’s candidacy, saying “PDP is the party that can take you to the mainstream of Nigeria.”

He said, “Before the primaries, I told people that for the peace of Nigeria, let us all support Atiku Abubakar. Some people were adamant, they insisted that it was the turn of Yoruba, but I told them Yorubas have ruled previously.

“But some people because of their selfish interest don’t want Atiku to emerge as our candidate. You cannot lose your integrity because of a pot of porridge.

“I believe in one Nigeria. All those calling for the break up of Nigeria cannot withstand the destruction of war. We don’t want war, we cannot afford to be refugees. What we want is peaceful resolutions of our problems.

“We have to move away from the concept of breaking Nigeria. We will not divorce, our children will not suffer.

“Even the countries that have stronger institutions than us cannot not afford to break up.

“From the recent developments, it has shown that Atiku is a true leader, he has put himself in the position of a true elder. We want an elder that can rebuild the party and the country.”

For Labour Party, supporters of the Party’s presidential candidate, Peter Obi, trooped out at the Lekki area to rally in support of Obi.

Although, there was a court order restricting them from converging at the Lekki-Toll Gate plaza, yet on Saturday morning, October 1, the supporters, known as the ‘Obidients,’ were seen in mass  marching at the Lekki-Epe Expressway, chanting ‘Obi! Obidient!’

Sharing a video on Twitter, a tweep, @Nkemchor posted, “The police presence at Lekki did not stop youths from gathering. Very proud of this generation. If Lekki is your route join them!”

Tweeps, who shared images, revealed the rally also held in other parts of Lagos, like Festac town, Surulere and the National Stadium.

Another tweep, @BensonIbeabuchi, tweeted, “Youths defy rainfall to come out in support of the Labour Party presidential candidate Peter Obi at Lekki, Lagos on October 1, 2022.”

The march had led to gridlocks recorded around the Lekki area while the rally lasted.

Recall that “Take Back Naija,” a coalition of support groups had earlier announced that it will go ahead with its planned Obi-Datti march in Lagos State on Saturday, October 1.

Speaking at a press conference, the Co-ordinator of the group, Mr Martins Udegbunam had said the Federal High Court in the state, didn’t stop the march, as they got permission to go ahead and conduct same, but were only instructed not to converge at the Tollgate but could pass through the gate.

“So, the rally is going to go on and it is my utmost joy to invite everybody to join us on this march that will be happening in three locations across Lagos.

“Our march is legal and constitutional, it is within the electoral time frame and calendar released by INEC and all security agencies have been duly and formally informed using the appropriate means.

“The police, NSCDC, Road safety, and DSS, will be on ground to provide security as we march,” he had said.

Recall the Nigeria Police, Lagos State Command, had warned against converging at the Lekki Toll Plaza.

To prevent such, the Police had embarked on a show of force exercise around the tollgate with men of the Rapid Response Squad and Lagos State Taskforce.

The deployment of armed policemen trailed a Federal High Court sitting in Lagos State on Wednesday, ordered the Labour Party and its supporters not to converge at the Lekki Toll-Gate for its planned rally.

On Friday, policemen were sighted heavily armed, and have practically taken over the Lekki community in a bid to forestall any planned rally in the area. During the show of force, Armoured Personnel Carriers (APCs), patrol vans and black maria were stationed at the tollgate vicinity.

Spokesperson of the Command, SP Benjamin Hundeyin in one of his tweets had said, “In continuation of its routine convoy patrol of the metropolis as directed by the Lagos Commissioner of Police, CP Abiodun Alabi, Commander RRS, CSP Olayinka Egbeyemi is presently leading RRS team and Lagos Taskforce on convoy patrol of the city.”