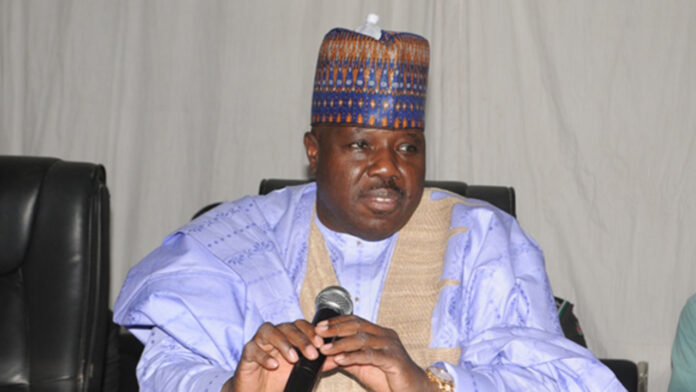 Ali Modu Sheriff who had since dumped PDP for the ruling party, the All Progressives Congress (APC) has however said that if Nigeria were to be a company, Chief Olusegun Obasanjo would have been its Chairman and Chief Executive Officer.

The former governor who arrived at Obasanjo’s residence at around quarter past nine in the morning went straight to for a closed door meeting with the former President.

Speaking with journalists during the visit, Sheriff said he was on a private visit to Obasanjo who he described as the Chairman and Chief Executive Officer of Nigeria.

He said “this is purely a private visit, you know Baba (Obasanjo) is an elder state man. If Nigeria is a company, Baba Obasanjo is the Chairman and Chief Executive of Nigeria. So, I came for consultation and have a private chat with baba.

“If Nigeria is a company, baba is the Chairman, I’m the younger one, so from time to time, I must come and greet my father, discuss with him, privately and go back”.

Asked if his discussion with the former President was on the Nigeria project, the APC chieftain said “I didn’t say that, it is a private visit”.

Asked again on his view on 2023, Sheriff jokingly told the journalists “Your view is my view, what is your view? What is my view? I want my party (APC) to win” apparently drumming support for the presidential bid of Asiwaju Bola Ahmed Tinubu

Speaking on his advice for Nigerians, Sheriff said “You journalists are in a better, informed position to advise the politicians than us”.

Sheriff is Borno State’s first governor to serve two consecutive terms (2003–2011).Though, he was a member of All Nigeria People’s Party (ANPP) but he would later join the All Progressives Congress becoming a founding member of that party.

In 2014, Sheriff switched affiliation to the People’s Democratic Party and acted as the National Working Committee chair from 16 February 2016 until the Supreme Court removed him and replaced by Ahmed Makarfi. He however on 26 April 2018 defected back to All Progressives Congress (APC)