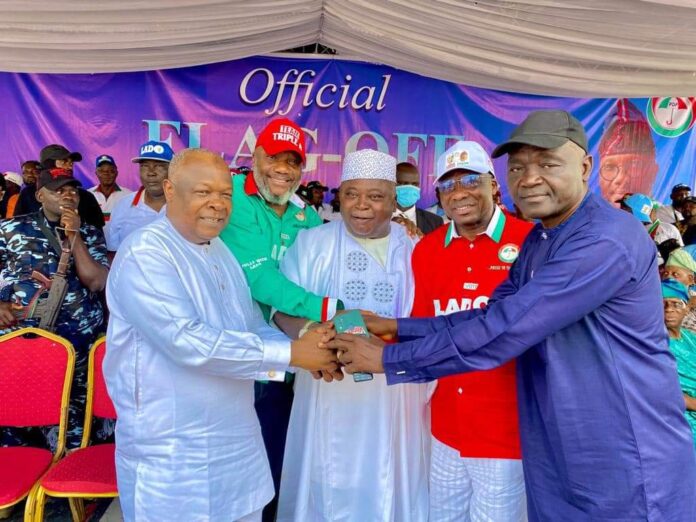 The governorship candidate of People’s Democratic Party (PDP) in Ogun State, Hon. Oladipupo Adebutu on Friday kicked off his campaign promising to pursue seven point agenda, if elected as governor of the State in 2023.

The campaign launch which was attended by thousands of party faithfuls took place at the Ake Palace Ground in Abeokuta.

Speaking at the launch, Adebutu vowed to pursue a transformative agenda, and initiate policies, strategies, core values and services that will drive the economic growth of the State.

He said, “our commitment to deliver the good people of Ogun State from the shackles of the ruling party stems from the first-hand experience, I have be living amongst my people in Ogun State for the past 31 years. I am privileged to feel the pains our people go through to earn a living”.

He lamented that the present government in the state has not been available for the people it governs with provisions of basic social services, particularly at the lower tier of government.

“In our quest to serve the people of our dear state, we conducted an independent survey to identify the needs of our people, the result of the survey is alarming and as a matter of fact, there is a need for an urgent rescue mission”.

“The survey revealed high rates of endemic poverty, youth unemployment, inadequate social services, poor infrastructure and insecurity, the cumulative effect is unbearable life for all and sundry. Insecurity pervades our communities and has become the norm, as our people cannot sleep with eyes closed again”.

“Dear people of Ogun State, It will interest you to know how much damage this government has caused us as a result of their inexperience, lack of integrity, incompetence and stratospheric height while key members of the government presently face grievous charges of corruption which ideally should have caused them to excuse themselves from governance”.

“The debt profile of the state is of great concern and worry, it keeps increasing since the inception of this government in 2019. The debt rose from N173.07bn in 2019 to N192.82bn in 2020, which caused our state to be ranked 7th most indebted state out of the 36 states. The situation has continued to get worse as the State’s debt is now been shielded from the public because it has astronomically gone up”.

The domestic debt profile as recorded by this administration again rose from N155.57bn in 2021 to N241.78bn by June 2022 representing a disheartening 55.4% increase in debt. This government has continuously succeeded in enlisting Ogun State in the list of highest indebted states in the country”.

“In contrast to the make-belief of this government that it grew the IGR to attain the 10th position in the 2021 fiscal performance, the expenditure per capita of Ogun State was at N5,120 per citizen which was lower than the National average of N8,129 spending per citizen on all the 36 states”.