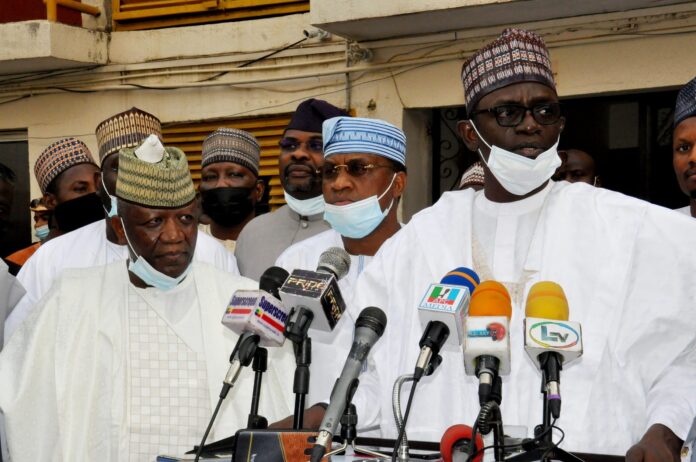 A milestone was achieved  when at the national secretariat of the All Progressives Congress (APC) recently, when  the Chairman, APC Caretaker/Extraordinary Convention Planning Committee, Governor Mai Mala Buni, reconciled the master minds of  the crisis that had bedeviled the  Zamfara State chapter of party.

After several hours of meeting, the duo of former Governor of the state Abdulaziz Yari alongside former Senator Kabiru Marafa, spoke to journalists   that they are ready to allow water to pass under the bridge for  peace to return to  the party in the state.

Speaking after the reconciliatory meeting, Governor Buni described it as a milestone, reiterating the determination of the Caretaker Committee to reconcile more warring factions in the states.

“With this, we have achieved a milestone as the Caretaker Committee of this great party. Our primary mandate being the reconciliation of our members across the country and rebuilding and repositioning of this party at all levels,” he said.

Confirming the reconciliation, former Governor Yari, said: “We are here on this important mission which I need not tell you what happened in Zamfara State in the past two years but you can see where we are.

“This meeting lasted for not more than two to three hours and lots of things were discussed, but the most important of what is being discussed is understanding that our coming together is paramount for any success now and in the future.

“We have built this party from zero level to where we are and Zamfara has ever remained an ANPP-APC state, and what led to that success is our coming together. So, togetherness is what we are working to achieve in the future and this is the starting point.

“This is not only symbolic, it is real that we understand all of us are human beings bound to make mistakes and that mistakes can be corrected so that we can come together to achieve a target and go and bring back our party to limelight in the state and also maintain in the centre.

“A lot of things have been said but the most important thing is we are together and this is the beginning and what happened in the past will never repeat itself,” he promised.

Speaking similarly, Senator Marfa, said: “I am delighted to be here because reconciliation is an integral part of every human endeavour. Like the previous speaker said, we are all human beings and we make mistakes and when mistakes happen, it is left for you to use it either as a source of strength or weakness.

“I hope our own mistake will serve as a source of strength for all of us and for APC itself especially and the country in general. Our country is facing very serious challenges. Our party was given unprecedented support that has never been given to any party in Nigeria and we owe the party and Mr President a duty to support them and support Mr President to deliver especially for us coming from Zamfara State and the North-West, in particular, we are facing very serious problems and for that reason, I think no amount of effort will be too much.

“I received a call from my friend and leader, the Governor of Yobe State, to come and attend a meeting. Despite the short notice, I felt anybody that calls you for reconciliation meeting, he or she calls you for goodness and I attended because of that reason and I am very happy with the robust decisions or discussions that we had in the office.

“I want to use this medium to tell Nigerians today, we initiated the process. Let me put it that way because we are not the only people we have behind us and these people have absolute confidence in all of us. So, today marks the very beginning in the chapter of APC in Zamfara State and I hope, given the assurances that I heard from various speakers during the meeting that at the end of the tunnel we would see light.

“We may not necessarily measure up to their expectations because we are human beings and Zamfara is over four million people, so there is no way we can please each and every one of them, but I want to use this medium to tell them that we will do our utmost best, all of us here, to make sure that we carry a majority of them in whatever decision we are going to take and God is going to see us through,” he assured.