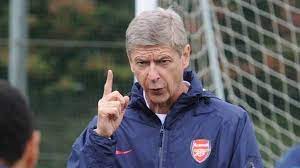 Former Arsenal boss, Arsene Wenger has given a major reason Germany crashed out of the World Cup in Qatar.
Wenger said that Germany’s ‘political demonstrations’ contributed to their early exit at the World Cup in Qatar.
Germany, one of the countries tipped to win the trophy, could not even make it out of the group stages.
The Germans had, moments before their first game against Japan, staged a protest on the pitch over FIFA’s decision not to allow OneLove armbands to be worn during the tournament. They went on to lose the match 2-1.
Wenger, who is FIFA’s Chief of Global Football Development, said that the countries who won their first games were those who were focused and have experience.
The FIFA chief added that teams such as France, England, and Brazil played well in the first game and knew that “When you go to the World Cup, you know you must not lose the first game.”
He suggested that Germany were not mentally ready for their first game against Japan, adding that teams “who had the mindset to focus on the competition and not on political demonstrations,” did well in the group stages.