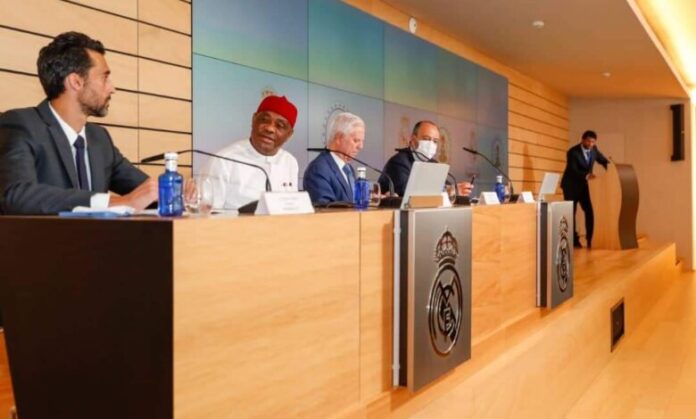 The Rivers State Government and Real Madrid Football Club (RMFC) have signed a cooperation ratification agreement for the promotion of sport amongst children and youths at the Real Madrid Academy, Port Harcourt.

The signing of the ratification of the framework for a cooperation agreement between the international football club and the Rivers State government took place over the weekend at the Auditorium of Real Madrid Sport City, Fuerzas Armadas avenue, 402, Madrid, Spain.

Governor Nyesom Wike signed on behalf of the Rivers State government while Mr. Enrique Sanchez, the Executive Vice president of the Real Madrid Foundation and Mr. Jihad Saade, who is President of Interact Sports jointly signed the agreement.

Wike commended the Real Madrid Foundation and the Interact Sports for the opportunity given to the Rivers State Government to partner with the Real Madrid football club in order to encourage Rivers’ youths to develop their talents and skill through sport.

He said the State government was pleased to ratify the agreement with the Real Madrid Foundation and assured that everything has been done to fully kick-start the Real Madrid Academy in Port Harcourt.

Wike, who was accompanied by the Abia Governor, Dr. Okezie Ikpeazu and the Rivers Attorney General and Commissioner for Justice, Professor Zacchaeus Adangor (SAN), explained that the initial intention was to admit only boys as students into the Real Madrid Academy but following the huge application received from prospective female students, the State government had to reconsider the policy.

“We had to stop to include the girls. We are very ready to kick-start the school and we believe that this is a very good opportunity for our people. We are honoured to be identified with the Real Madrid, it is a good brand for us.”

Wike reaffirmed his belief that sport is an important factor in social integration and in the promotion of ethical values such as solidarity, participation, team spirit, respect for one’s opponent and non-discrimination.

On his part, the President of Interact Sports, Jihad Saade, asserted that Interact Sport has been an active contributor to the dynamic transformation of Nigeria, moving forward with modernity without forgetting Nigeria’s rich culture and heritage.

All the parties mutually acknowledged that they have the necessary legal capacity and authorisation to execute and subscribe to the protocol.