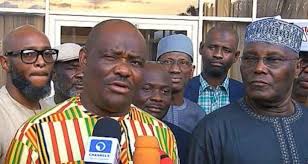 In what seems to be normal, struggle for a political position is usually associated with schemings, horse trading, lobbying, alignments and realignments. This has become the recent character of the players in the number one opposition party in the country, Peoples Democratic Party (PDP) ahead of its National Convention.

The political juggernauts are not resting their heads as everyone is seriously working hard to see his Candidate emerge the National Chairman of the party giving to the important role whoever occupies the office will play towards the choice of the party for its Presidential flagbearer.

Our inquiry showed that the former vice president, Atiku Abubakar, Rivers State Governor Nyeson Wike and the Governor of Oyo state are set to clash in a battle for the control of the Peoples Democratic Party (PDP) as the race for the Chairmanship of the party gets tougher.

Governor Wike of Rivers State and his Oyo state counterpart, Engr. Seyi Makinde was said to have before now had affinity and rooted for the former Governor of Osun state, Mr Olagunsoye Oyintola as the next National Chairman of the party but the affinity has since collapsed.

Investigation revealed that Wike has now thrown his weight behind the Deputy Vice Chairman of the party in the south-south, Mr Dan Orbin while Makinde is supporting the aspiration of the former governorship Candidate of the party in Ondo State, Mr Eyitayo Jegede (SAN).

According to Information within the party, Governor Wike’s choice of candidate is to allow him to be in charge and have a Chairman that will be directly answerable to him the same way the erstwhile National Chairman, Prince Uche Secondus was before disagreement arose and other leaders seemed not to be finding it comfortable.

The leaders of the party are of the argument that the party shouldn’t be pocketed by a single individual and want someone that has strong financial independence to avoid being muscled around by powerful individuals within the party.

Meanwhile, with Wike and Makinde withdrawing their support for Oyintola, former Governors and ex-ministers have thrown their weight behind him ahead of the next month’s national Convention.

The former Governors believe that as a former Governor he has the experience and network to chair the party. Another thing working on his favour is the agitation from party stakeholders of Southwest that the zone should be supported by other zones to produce the next National Chairman in the forthcoming national convention.

The southwest PDP leaders believe the Chairmanship should be specifically zoned to the southwest to compensate them for the 2017 situation in which it was unjustly denied the slot after the post had been zoned to it.

According to their argument, the denial of the zone of the post of chairman in 2017 led to the dwindling fortunes of the party in the zone. The leaders are of the position that by having a National Chairman from the zone, it will boost the party’s chances in Southwest in 2023.

With the party’s zoning Committee commencement of meeting on Saturday, the committee has gone ahead to maintain the office of the National Chairman would be thrown open and by so doing, all interested persons from the South are free to contest.