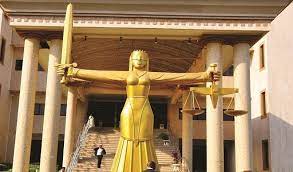 A Federal High Court, Abuja, on Friday, ordered that the salary accounts of Benue State workers be unfrozen, following a plea by the state government over inability to pay workers’ salaries.

Justice Inyang Ekwo gave the order after the application for lease of salary accounts and verifying affidavit was moved by counsel to the state government, Terkura Pepe, SAN.

The salary accounts to be unfrozen are domiciled in Fidelity Bank Plc, United Bank for Africa (UBA) and Access Bank Plc.

Reports state that Justice Ekwo had, on Oct. 26, made an interim order, freezing all bank accounts of Benue government maintained in all the banks in the country following its inability to pay back N333 million loan borrowed in 2008.

The judge also made an interim order “freezing and attaching the JAAC Bank Accounts (Joint Accounts Allocation committee), Internal Generated Revenue Accounts, all bank accounts both current, savings, fixed deposits and/or investments accounts of the 2nd respondent (Benue  Government) maintained with all the banks mentioned above pending the hearing and determination of the substantive suit.”

Ekwo, who gave the order following an ex-parte motion brought by Asset Management Corporation of Nigeria (AMCON), also directed that the bank accounts of HPPS Multilink Services Ltd be frozen pending the hearing and the determination of the substantive suit.

He further made an interim order, “restraining all banks and/or other financial institutions above mentioned in Nigeria forthwith from releasing or dealing in any manner howsoever with monies held in any account to which the respondents are signatories pending the hearing and determination of the substantive suit.

“An order is hereby made directing all banks and/or other financial institutions in Nigeria to, within seven days of the date of service of this order, file and serve an affidavit of compliance disclosing with statement on each account howsoever designated, held and/or maintained by the respondents and ail accounts to which the respondents are signatories for a period of sic months prior to the date of service of this order till date.”

A correspondent also reports that while AMCON is the claimant, the company and the state government are 1st and 2nd respondents respectively.

Although the matter came up on Tuesday for the banks to show an affidavit of compliance with the order, Justice Ekwo had adjourned the matter until Nov. 22.

However, Pere, on Thursday, told the court that there was need for the application to be heard expeditiously due to the urgency involved.

According to him, the Benue State Government has been completely shut down by the interim order of court.

When the matter was called, Pepe told the court that the application had been filed and hr urged the court to grant the prayers.

Justice Ekwo, who granted the reliefs sought by Benue government, ordered that the order should be complied with within 14 days, after which a refreezing order would be made should parties failed to resolve the matter.

He directed that the the applicant should engage AMCON with a view to resolving the matter.

Ekwo then adjourned the matter until Nov. 22 for mention.