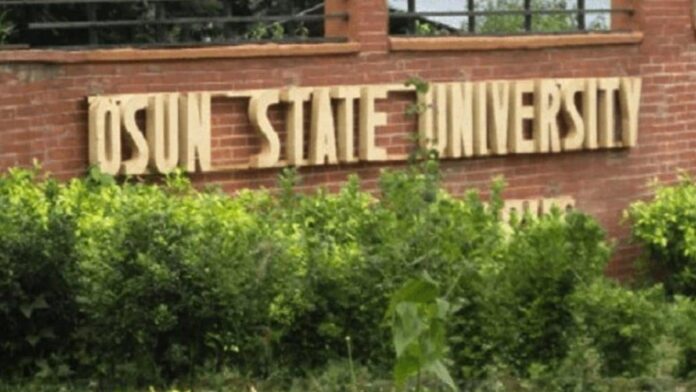 The Vice-Chancellor, Osun State University (UNIOSUN), Professor Olabode Popoola, has said the institution will confer first degree awards on one thousand eight hundred and fifteen (1,815) graduands while two hundred and six (206) others will be conferred with Postgraduate Degrees and Diplomas during the 10th convocation ceremonies.

The VC equally revealed how the institution’s tree-planting campaign has contributed to the reduction of carbon dioxide in the atmosphere.

Professor Popoola, said the above on Tuesday, in Osogbo, while addressing journalists with respect to the university’s 10th convocation ceremonies.

The convocation ceremonies which were flagged off on Sunday with a thanksgiving service will continue with series of activities till Tuesday, 21st of September, 2021.

He further said, “the 10th convocation ceremonies of this University would be a hybrid mode where physical ceremonies would be held, and the virtual approach would be maintained for those unable to be with us physically.

“Out of the one thousand eight hundred and fifteen undergraduate graduands, thirty-five (35) representing 1.93% of the total number of graduands are in the First Class.

“Under the Postgraduate graduands, we have one hundred and sixty-nine (169) Academic Masters, sixteen (16) Professional Masters,’ and twenty-one (21 Postgraduate Diploma graduands from different programmes spread across the 12 faculties in the University.”

Popoola, who said the institution had planted more than 10,000 trees across the six colleges in Osun State, said the survival rate of the trees rate has been nothing less than 60 percent.

He said, “We call it matriculating tree-planting campaign. It is supposed to signify your coming into the university. It is like a ritual. We have roughly 10,300 trees planted. The idea is for these students to be able to nurture their seedlings, ensuring that they survive.

“It is not about this university. It is about nature. Any tree that is planted anywhere in the world helps to reduce the carbon dioxide rate.”