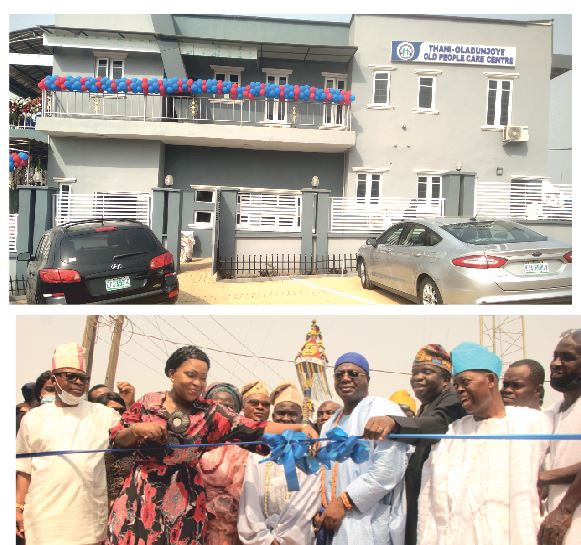 The Centre, located at 65, Owode Street, Epe, boasts of modern facilities such as consulting rooms, Pharmacy and relaxation sections all meant to cater for the well being of elderly people in the community.

The event which held recently in Epe was marked with pomp and pageantry and had in attendance various dignitaries from all walks of life which included traditional rulers, politicians, civil servants and captains of industries. Among the dignitaries in attendance were the Oloja of Epe, HRM Oba Kamorudeen Ishola Animashaun, the Olu of Epe Kingdom, HRM Oba Shefiu Olatunji Adewale, the Alara of Ilara, HRM Oba Olufolarin Ogunsanwa, representative of the Executive Governor of Lagos State, Hon. Princess Aderemi Adebowale, former senator of the Federal Republic of Nigeria, Senator Musiliu Obanikoro, representative of the Managing Director of Greenlife Pharmaceuticals Ltd, Mr. Derrick Osondu and the Executive Chairman of Epe Local Government, Hon. Princess Surah Olayemi Animashaun.

In his opening remarks at the event, Mr. Thani stated that he has always had a burning desire to ‘give back to the society.’ He stated that the idea came to him about 14 years ago when he lost his dear mother, Madam Sidikatu Thani-Oladunjoye. Before that, he had also lost his beloved father some years ago. He recalled that despite their old age, before they died, they all still lived a very healthy life and had other family members and their children that paid them visits on a monthly basis.

He stated that apart from the grace of Almighty God which upon their lives, these two factors: quality health care and family bonding, helped to prolong the life of his parents and brother. He thereafter resolved that if God blesses him, he will do something for the elderly in his community in the areas of Medicare and Recreational Facilities.

He further stated that before he started the project, he embarked on a little research and spoke with a number of senior citizens in Epe and discovered that they require geriatric care in terms of medical aid, peer social interaction, and recreation. He commended the Governor of Lagos State for all the efforts he has put in place to care for the elderly in the society.

Mr. Thani stated that through some research findings, he and his team discovered some very common diseases and illness that affect elderly people. Some of these are: high blood pressure also known as hypertension, diabetes, arthritis, urinary tract infections, eye infections, nutritional deficiencies, unhygienic lifestyles, malaria fever and pains. He stated that the Centre shall pay attention at no cost to the elderly, by conducting basic medical tests for the elderly and provision of a minimum of two doctors at the Centre on every clinic day. The Centre shall also have a virile Pharmacy section where drugs will be given to the elderly. There shall also be health talks and counselling for the elderly.

Furthermore, in order to ensure adequate provision of amenities, Mr. Thani also stated that the Centre shall collaborate with other NGOs to identify areas that are outside the scope of its operation. Recreation facilities will be provided to enable the elderly to interact with one another, perform light aerobics, musical entertainment and celebration of their birthdays and other special days in their lives. In the near future, he stated that the Centre will provide feeding to the elderly in the community.

In her remarks, the representative of the Executive Governor of Lagos State, Hon. Princess Aderemi Adebowale, who commissioned the project, commended Mr. Thani for the bold initiative, she stated that it is in the plan of the state Government to do something similar in all the local government areas of the state. Going forward, she said the state government is in the process of providing free BRT bus services that will specially cater for the transportation needs of the elderly people in the society. She enjoined all citizens of Epe and Lagos to emulate the kind gesture of Mr. Tunde Thani.

Also speaking at the event, former senator of the Federal Republic of Nigeria, Senator Musiliu Obanikoro, commended Mr. Thani for the noble initiative. He prayed that the project will bring peace and unity to the people of Epe.

Also commending Mr. Thani for the project, the Managing Director of Greenlife Pharmaceuticals, Mr. Peter Nwosu, represented by Mr. Derick Osondu, stated that his company has donated an ambulance to assist the Centre in its daily activities. He also promised to supply the Centre with various drugs from the stable of Greenlife Pharmaceuticals Limited.

While giving the vote of thanks, wife of Mr. Tunde Thani, Mrs. Bolanle Thani, thanked the royal fathers and other dignitaries for attending the event. She stated that the project has been a life long dream of her husband and prayed that it will bring succor to the elderly people in Epe division of the state.