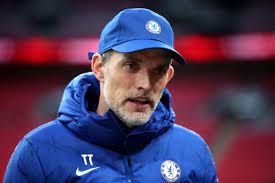 Tammy Abraham could play for Chelsea in the Super Cup on Wednesday, but Thomas Tuchel, Chelsea`s head coach said the striker’s future is being regularly evaluated amid links with a move from the Stamford Bridge.

After scoring 15 Premier League goals for the Blues in the 2020-21 season when Frank Lampard was in charge, Abraham saw his opportunities diminish under Tuchel last season.

The 23-year-old started only three league fixtures following the appointment of Tuchel in late January, while he did not feature at all in the knockout stages of the Champions League Chelsea won in Porto.

His lack of playing time led to speculation of a switch from Stamford Bridge before the transfer window closes, with Jose Mourinho’s Roma reportedly interested.

He has been linked to Arsenal and while the forward may feature for his current employers against Villarreal on Wednesday, his situation could be subject to change.

“Tammy is, right now, in the squad. He did some good preparation matches,” Tuchel told reporters ahead of the fixture against the Europa League holders in Belfast.

“He was clearly not happy with the last half-a-year, maybe he has reasons not to be happy and maybe it was my fault

“I can absolutely understand he wants more minutes, so the decision will be how we plan, what are his plans, does he fight his way back into the team from where he ended last season.

“This is quite a normal situation in preparation until the transfer window closes. He is one of these players where we constantly evaluate the situation and adapt.”

While Olivier Giroud has departed to Milan, opportunities for Abraham could remain scarce if Chelsea, as expected, bring Romelu Lukaku back to the club.

The Belgium international is set to join from Inter, adding further depth to an attacking unit that also includes Timo Werner.

Tuchel also utilised Kai Havertz in a central attacking role last season at times, with Abraham not even on the bench for the Champions League final win over Manchester City.