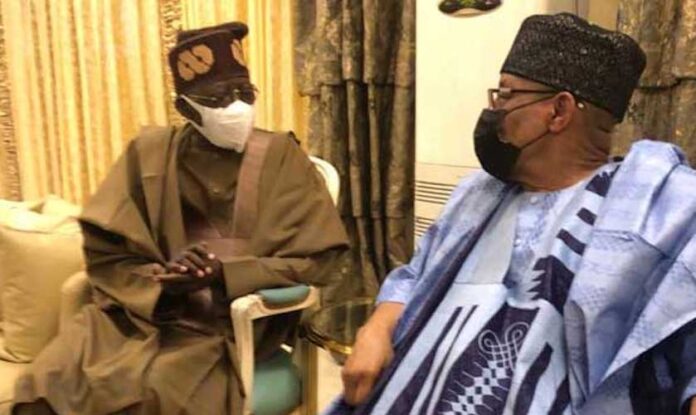 The National Leader of the All Progressives Congress (APC) and former Lagos State Governor, Asiwaju Bola Ahmed Tinubu, on Thursday visited former military president, General Ibrahim Badamasi Babangida, to “get his blessing” for his presidential bid.

Tinubu was at the Minna residence of the former military president on Thursday along with the Niger State Governor, Alhaji Abubakar Sani Bello; Hon. James Faleke and Hon. Ibrahim Abdulahi, members of the House of Representatives from Lagos and Niger states respectively; and Senator Abu Fari from Katsina.

The meeting with IBB was held behind closed doors.

Tinubu after the parley told newsmen that he was in IBB’s residence to seek his blessing, saying “there is no way I will visit Niger state without visiting IBB and receive his prayers.

“I cannot come to Niger state and not stop by to pay a courtesy call on the enigma, General Ibrahim Badamasi Babangida,” Tinubu said.

He said, “If you (Press) restrict my visit to this house, that is it. Generally, I came to Niger state to commiserate with the Governor and the people of Niger state. And so, I can’t stop by without paying a courtesy call to the enigma, General Ibrahim Badamasi Babangida.”

Asked what was discussed at the meeting, Tinubu replied: “He gave me his prayers.”

The APC national leader also commented on his decision to aspire for president, saying: “We are running a democracy, I took my decision voluntarily and I am running for the Presidency of the country.

“When I made the declaration, I told you that I am still consulting and I will consult as widely as possible,” he said.

The presidential aspirant had earlier paid a courtesy call on Governor Bello, who spoke glowingly of his contributions to the development of Lagos State.