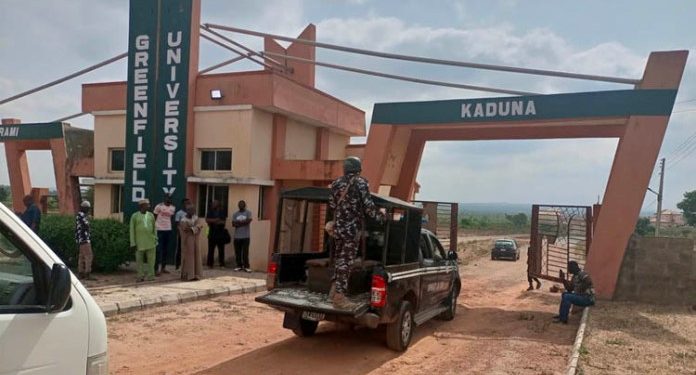 Barely four days after the killing of three of the Greenfield University students abducted last Tuesday, another two of the undergraduates have been confirmed killed by their abductors just as some students of the Federal University of Agriculture, Makurdi were abducted by gunmen

This disclosure was made by the Commissioner for Internal Security and Home Affairs, Mr Samuel Aruwan said in a statement issued on Monday in Kaduna.

Though the identities of the two killed students were not disclosed, the Commissioner said their bodies have been evacuated to a mortuary.

“The retrieved corpses have been evacuated to a mortuary, and the university has been notified of the development.

“The Government of Kaduna State under the leadership of Malam Nasir El-Rufai is saddened by this evil perpetrated against innocent students abducted while pursuing their education for a glorious future.

“The Government sends its deep empathy to their families and the university management, and prays for the repose of their souls,” Aruwan stated.

It would be recalled that the bandits had killed three of the abducted students on Friday, while one staff of the University was killed on Tuesday.

About 23 students and staff were abducted from the university campus on April 20.

In related development, unknown gunmen have invaded the Federal University of Agriculture located in Makurdi, the Benue State Capital and kidnapped scores of students. This is coming a week after gunmen struck at Greenfield university, Kaduna.

According to a statement from the university’s Director of Information, Protocol and Public Relations Unit (IPPR), Mrs Rosemary Waku, the University has reported the incident to the police and all relevant security agencies.

“The University has not heard anything from the students or their captors since the unfortunate incidence took place,” The statement read

While confirming the incident,  Police spokesperson in Benue, DSP Catherine Anene, told journalists that the students were kidnapped at about 10.20 p.m. while studying close to a school hall.

She said full investigations of the crime had started to track the kidnappers.

“Information was received from the school authority that on April 24, at about 10.20 p.m. some unknown men kidnapped three students who were studying.

“We received that information and we are on it. I know that we are very close. We will continue to do our best to ensure that we get to the root of this crime.

“For now, my advice to parents of the students is that they should remain calm. We are doing our best to ensure that they get their children back,” she said.

Anene declined to comment on whether the kidnappers had contacted the school authorities or the parents of the victims or not.

A student who claimed to have witnessed the incident said the heavily-armed kidnappers came on foot to the Engineering Department from where they took the victims into the bush.

The school management, led by the Vice-Chancellor, Prof. Richard Kimbir had suspended lectures and assured students of their safety while in school.

Also, barely 48 hours after the country home of Imo State governor, Hope Uzodinma was razed by yet to be apprehended gunmen, a Commissioner in his cabinet, Iyke Ume was shot by hoodlums in Owerri.

According to information gathered by our Correspondent, U me, who is the  Commissioner for Entrepreneurship and Skill Acquisition in the State was shot  at Orji, on Owerri- Okigwe Road very close to the Orji Divisional Police Headquarters.

According to eyewitness account, the Commissioner was riding with the Special Adviser on Inter Party Affairs, Domic Uzowuru, to his home in Orji, when the armed robbers double-crossed him and shot him on his leg and hand.

It was gathered that the attacked commissioner was shot while dropping Uzowuru at his house in Orji from after a service of song with another commissioner.

When contacted, the special adviser to the governor on Inter Party Affairs, Domic Uzowuru, confirmed that the Commissioner was shot.

He said, “I was not shot. The Commissioner was shot. My phone and that of the commissioners were snatched. We were coming from a service of song from one of us, Austin Nnawuihe. He was dropping me when the robbers struck. I am fine to the glory of God.”

A police officer at the headquarters, who spoke to journalists in the evening, said that on arrival, the gunmen opened fire on the cops who challenged them, leading to the death of not less than five policemen.

The invaders reportedly also freed all the suspects in the cells and carted away arms as they torch the security facility.

The source said, “Our area command headquarters in Okigwe south is on fire. Six policemen shot dead. They also freed the suspects before igniting a fire on the facility.”

When contacted, the police spokesperson in the state, Orlando Ikeokwu, confirmed the two incidents, he saidfive policemen were killed while one was missing during the attack.

He disclosed that the command had launched an investigation into the onslaught.