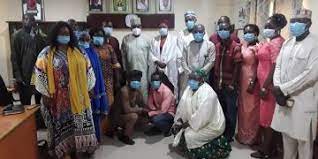 The Taraba Agency for the Control of AIDS (TACA) is partnering with the State House of Assembly for a law that would sanction those who deliberately infect others or fake medical certification for marriages.

This is in an effort to meet the 2030 projection for total elimination of HIV and AIDS in the state.

The Director-General of the Agency in the state, Dr Garba Danjuma, who disclosed this during an interaction with members of Taraba Health Media Advocacy Network, (THMAN) said that significant progress had been made in the last decade.

He said that the major challenge was with some targeted groups such as commercial sex workers who indulged in very risky behaviours that posed a major threat to the efforts to rid the world of the virus.

“We have made significant progress in the battle against HIV and AIDS. From second in the country in 2012, we are now the fourth, which means we are the highest in North East and second highest in the North, after Benue.

“This means we need to change strategy so that we can reach the most vulnerable sections.

“Drug addicts have the tendency of sharing syringes same way as commercial sex workers do.

“They also put themselves at risk by having unprotected sex and so we are targeting these groups specifically and pregnant women.

“That is why we are collaborating with the state assembly for a law that sanctions persons who are positive and deceive others into marriage or who forge medical certificates.

“We would focus on premarital counseling and testing and prevention of mother to child transmission,” he said.

He explained that the drive for a more robust collaboration with the media was premised on the fact that there was still a lot of enlightenment to be done.

“As pressmen, you are able to reach all sections of the society in ways that are very impressive.

“You have done wonderful jobs in the past and your deliberate efforts count so much for the progress we have made so far. We believe that we can do a lot more with your assistance,” the director-general said.

The state Chairman of the Media network, Rinyiputen Boshi, assured TACA that the media network would work with the agency and other health partners to ensure that the well-being of the people remained top priority at all times.

The interaction came shortly after an end line meeting of the network where members took stock of the progress made so far and the challenges confronting reporting of health related issues.

The network resolved to work even more in the days ahead to tackle the menace of HIV and AIDS, COVID-19, hepatitis and other medical conditions plaguing the people of the state.