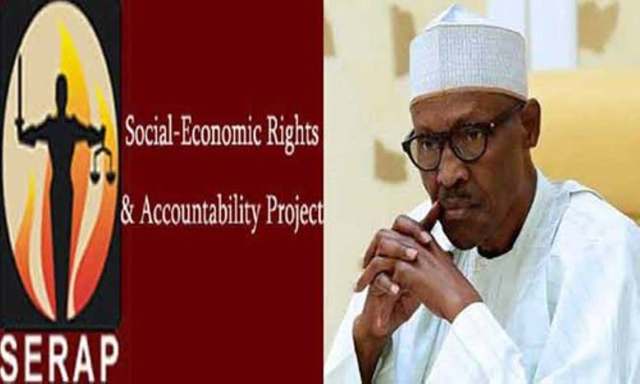 SERAP said, “Pending the recovery of the missing public funds, we urge you to redirect some of the presidency’s budget of N3.6 billion on feeding and travels, and the N134 billion allocated to the National Assembly in the 2022 budget to meet the demands by ASUU.”

SERAP also urged him to “send to the National Assembly a fresh supplementary appropriation bill, which reflects the proposed redirected budget, for its approval.”

In the letter dated July 2, 2022 and signed by SERAP deputy director Kolawole Oluwadare, the organisation said, “Meeting the demands by ASUU would confront the persistent and widening inequality in educational opportunity, and promote equal protection for poor Nigerian children.”

According to SERAP, “The apparent failure by your government to agree with the reasonable demands by ASUU, implement the good faith agreement with the union and to satisfactorily resolve the issues has kept poor Nigerian children at home while the children of the country’s politicians attend private schools.”

ASUU accused the government of poor commitment to the payment of academic earned allowance (EAA); poor funding, the continued use of the Integrated Personnel Payroll Information System and refusal to adopt the Universities Transparency and Accountability Solution (UTAS), among others.

The letter, read in part: “The poor treatment of Nigerian children in the country’s public tertiary institutions is inconsistent and incompatible with the Nigerian Constitution and the country’s international human rights obligations.

“Widening inequalities in the area of education bear all the more dramatic consequences given the importance of education, as an empowering right, in giving the possibility to all to explore and realise their potential.

“Apart from being a right in itself, the right to education is also an enabling right. Education creates the ‘voice’ through which rights can be claimed and protected, and without education people lack the capacity to achieve valuable functioning as part of the living.

“If people have access to education they can develop the skills, capacity and confidence to secure other rights. Education gives people the ability to access information detailing the range of rights that they hold, and government’s obligations.

“We would be grateful if the recommended measures are taken within seven days of the receipt and/or publication of this letter. If we have not heard from you by then, SERAP shall take all appropriate legal actions to compel your government to comply with our request in the public interest.

“Recovering the missing N105.7bn of public funds and redirecting the funds, as well as some parts of the presidency and National Assembly budgets to meet the demands by ASUU would end the protracted negotiations between ASUU and the Federal Government and improve access of poor children to education.

“Recovering the missing N105.7bn of public funds and redirecting the funds, as well as some parts of the presidency and National Assembly budgets to meet the demands by ASUU would also be in the public interest.

“The proposed spending of taxpayers’ and public funds would also be consistent with constitutional responsibilities and oath of office by public officers, as well as comply with Chapter 2 of the Nigerian Constitution relating to fundamental objectives and directive principles of state policy.

“Recovering the missing N105.7bn of public funds and redirecting the funds, as well as some parts of the presidency and National Assembly would be entirely consistent with your constitutional oath of office, and with the letter and spirit of the Nigerian Constitution, as it would promote equal opportunities for poor children who rely on public schools and have no opportunity for university education elsewhere.

“SERAP is concerned that Nigeria’s public tertiary institutions have continued to experience a steady decline. The quality of public education offered is low and standards have continued to drop. The learning environment does not promote effective learning.

“Public school facilities are in a state of extreme disrepair, requiring major rehabilitation. Basic teaching and learning resources are generally not available, leaving many lecturers and other staff members profoundly demoralised.

“The failure to end the ASUU strike has hugely contributed to denying poor Nigerian children access to quality education, opportunities and development. The enjoyment of the right to education for millions of poor children remains a distant goal.

“Under international law, states are required to progressively implement socio-economic rights including the right to quality education commensurate with the level of resources available. Gross misallocation of resources to the detriment of the enjoyment of the right to quality education can constitute a human rights violation.

“A violation of the right to education will occur when there is insufficient expenditure or misallocation of public resources which results in the non-enjoyment of access to education by poor Nigerian children.

“The failure to meet the reasonable demands by ASUU cannot be justified especially given the failure and/or refusal by the Federal Government to recover trillions of Naira reportedly missing in ministries, departments and agencies, and the huge funds allocated to the presidency and the National Assembly in the 2022 budget.

“According to our information, N105.7bn of public funds are missing, as documented by the Auditor-General of the Federation in his annual audited report for 2018. Also, while the presidency has budgeted N3.6 billion for feeding and travels, N134 billion has been allocated to the National Assembly in the 2022 budget.

“Furthermore, ASUU and other university workers’ unions have been on strike for several months. The unions’ demands, among other things, include better funding for the nation’s public tertiary institutions and improved welfare for their members.

“While your government has reportedly released N34 billion for the payment of minimum wage consequential adjustments from 2019, ASUU has maintained that until its core demands are met, it will not suspend the strike.

“In protest of the continuous use of IPPIS and refusal by the Federal Government to implement the renegotiated 2009 agreement that was completed in May 2021, ASUU resumed nationwide strike on February 14.”