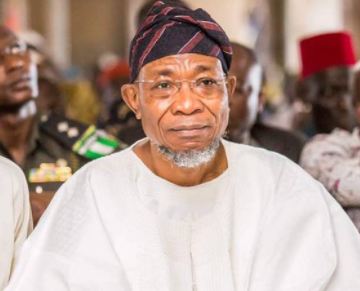 The current Minister of Interior and former Governor of Osun State, Ogbeni Rauf Aregbesola has been advised to stop fomenting crisis in the state and allow the state residents to enjoy the peace currently prevailing in the state.

The Pioneer President-General of the Oranmiyan Group Worldwide Foundation and current chieftain of the ruling All Progressives Congress, APC in Osun State, Prince Felix Awofisayo gave the advice in a press statement he personally signed and made available to Nigerian NewsDirect in Osogbo, the state capital, in his reaction to Monday’s shooting by thugs and security personnel in the minister’s entourage.

According to him, Ogbeni Aregbesola’s arrival in the state capital on Monday accompanied by sporadic shooting by his security details and hoodlums in his entourage was uncalled for and should be condemned by all peace-loving individuals across the country.

Asking what the minister stands to gain should anyone be hit by a stray bullet shot by either his security details or hoodlums in his entourage.

“I do not know what Ogbeni Aregbesola stands to gain if anyone from among traders by the roadside be hit by stray bullets from guns held by his security details or hoodlums in his entourage,” Prince Awofisayo stressed.

He therefore admonished the nation’s Minister of Interior to call all the security personnel and hoodlums in his entourage to order and allow residents of the state to enjoy the current peace pervading the state.

The APC chieftain also went down memory lane by asserting that when the minister was at the helms of affairs in the state, no one could do what he did on Monday without repercussions.

“When Ogbeni Aregbesola was the governor of the state, no one could dare to engage in any street show in image of a political rally without grave repercussions,” the APC chieftain further stated.

He therefore advised the former governor to stop fanning the embers of discord within the APC fold in the state and engaging in acts capable of frustrating the state peace.

The Ile-Ife Prince also charged the state Governor Gboyega Oyetola to stay focused and not be distracted by the shenanigans of those opposing his style of administration, calling them enemies of development.

“My candid advice to Governor Oyetola is to remain focused and not be distracted by the shenanigans of those opposing his style of administration and by extension, enemies of development,” he stated.

Prince Awofisayo also charged residents and indigenes of the state to exercise no fear while going for their daily businesses as the state government is in full control of affairs of the state and ready to deal decisively with any miscreants on errands to truncate the state peace.