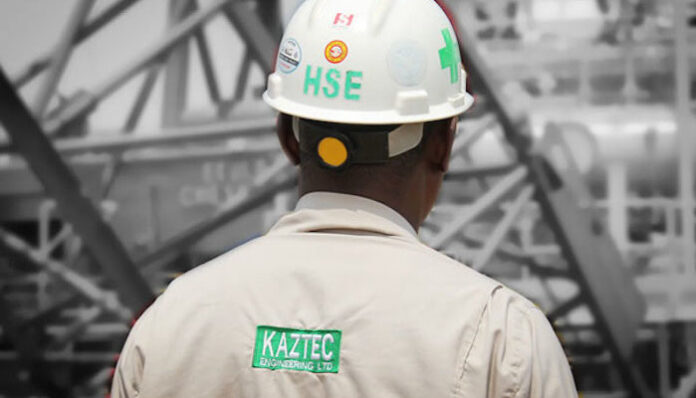 The Federal Government has formally received the report from committee on compensatory contracts and others incentives for KAZTEC Engineering Ltd.

Kaztec Engineering Limited is a subsidiary of Chrome Group, an indigenous engineering and fabrication company owned by Chief Emeka Offor.

The Company’s Fabrication yard on Snake Island, which houses Badagry Creek Industrial Park Free Trade Zone, licensed in 2014 was grounded in March 2015 when Addax Petroleum had tax issues with the Federal Government.

The grounding of the company also led to abrupt halt of the platform construction for oil production from Antan and Ofrima/Udele fields and unpaid salaries to workers, contractors, and vendors.

Receiving the report in Abuja, on Wednesday, the Minister of State for Petroleum Resources Chief Timipre Sylva commended the committee for the thorough work done with the report.

“You were carefully chosen to be on this committee after the President asked me to look into this matter and come up with some recommendations.

“So, I searched for the best brains to look at the matter and you have not disappointed us. I must say that you did a great job; we in the Ministry of Petroleum are here as independent arbiters to ensure justice in the petroleum industry.

“Justice for our investors and justice also for Nigeria. I am happy that you have done a great job, we are going to go through your report and ensure that your recommendations are forwarded to the president and implemented,” he said

Earlier, Senator Magnus Abbe, Chairman of the Committee, commended the president for the privilege to work on committee to help revive the grounded fabricated yard for the economic growth of the nation.

He said that the Committee had earlier submitted an interim report which had made Nigerians to understand the situation on ground.

“It is important that Nigerians should realise the extent of what happened to this project, this was a project that was to extract over 19 million barrels of crude to our existing reserve and would have added to our daily production.

“After the project was awarded and everything in place, contracts awarded and close to one billion dollars invested, Addax petroleum called Force Majeure on issues unrelated to project at hand.

“That action  took over 3000 Nigerians out of work, put invested millions of dollars that the country would have used for other things in Jeopardy,” he said.

He added that the committee had carefully analysed the ugly situation found on ground at the site and the negative effect it had on the indigenous company and the Nigerian economy.

“Not only that the workers were affected but a lot of things that would have been done in country and be useful in other projects will be paid for again.

“In the interim report we presented, these issues were well addressed, today, we are here to officially present the report and to say that the members of the committee were competent and drawn from reputable organisation,” he said.

He said that committee did a thorough work in looking into all the circumstances on the matter adding that it had no right to lay any blame on the situation but to advise the President on the legally permissible steps that could be taken to salvage the situation and help the Nigerian economy.

Community convos: What’s going on with the PIB and community engagement?