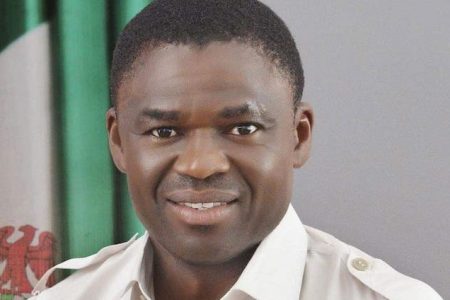 Shaibu gave the charge at the Samuel Ogbemudia Stadium where Usman was received by several Nigerians.

“We are very excited and happy to have you in our midst and in your state. You can see the excitement in the faces of the fans and these young ones.

“At home, people stay late into night to watch those fights of yours,” he told Usman.

But, turning to the state’s youths, Shaibu said there were lots of take-aways from Usman.

“Let us emulate those things that can lead us to greatness. Let us be inspired by the likes of Kamaru Usman. We have spoken and he is interested in having more champions in our midst,” he said.

The deputy governor disclosed that Edo as a state would look into how it can partner with Usman to groom athletes from our state.

“He has made name for himself and he is ready to give back to the society. He has told me he will develop more champions from our midst.

“For us, we will partner with his foundation to achieve that dream,” he said.

Shaibu stated that Usman’s exploits brought joy to several people, and they were always praying for him to do well.

“While you were fighting, we were here praying for victory for you and we are excited and happy that our prayers paid off.

“Your physical presence here is a motivation and has further inspired us the more.

“Therefore, beyond being fans, our youths also look forward to something like this and to also be celebrated,” he said.

In his remarks, Usman said he had been away from home for more than 20 years and it was nice to be back home.

“It’s a great pleasure to be home and see great facilities built by Gov. Godwin Obaseki and his deputy, Philip Shaibu. So, I want to say a big ‘thank you’ to them.”

He said he would be spurred into helping out by those facilities.

“One of my biggest thinking when I was coming home was the foundation, and how do we start to inspire the youths and everybody to get there.

“But with these facilities, I can see that the government is already taking the first step,” Usman said.