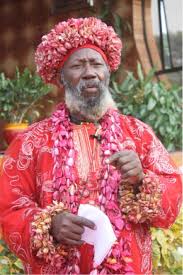 The founder of the One Love Family, SatGuru Maharaj-ji, has said Nigeria needs a President with courage of a lion like former Governor of Lagos State, Bola Tinubu, an a presidential aspirant to steer the ship of the country in 2023 for restoration.
Guru Maharaj ji, while endorsing the presidential ambition of Tinubu, a National Leader of the All Progressives Congress, APC, urged the southerners to unite in wrestling the power from the north in 2023 general polls, saying, ” it’s time for the South to takeover the Presidency after expiration of the incumbent President Muhammadu Buhari.
Maharaj -ji made the remarks on Saturday, while addressing the media on state of the nation and 2023 general elections, held at Sat Guru Maharaj ji Vilage, Iju Ishaga, Ifako Local Government Area, of Lagos State.
The founder, who was of the opinion that the power should return to the South in 2023, called on southerners to unite to wrestle power from north.
Maharaj ji said: “It is time for the South to takeover the Presidency after expiration of the incumbent President Muhammadu Buhari.
“We need someone who can stand up and solve our problems. We don’t need a lameduck president but one with a lion heart.
“We must fight to make sure that the government that is coming is a popular and people’s oriented government which Tinubu- rightly fitted.”
According to him, “the nation needs a President that will use public fund to make people happy and not hypocrites and deceivers.
He said that a leader likeTinubu, a former Governor of Lagos could lead the country in 2023 for restoration.
“Tinubu is a good leader going by his antecedent in Lagos.
“However, he should not allow religion to affect his good deeds. He is detribalised Nigeria but should be careful about religion controversy,” Maraji-Ji added.
The founder, who Tinubu seemed to be determined, said that the next President should be the one that would be able to call a spade a spade.
“We need a President that will be ready to die for Nigeria like late Nnamdi Azikwe, Obafemi Awolowo, and Nelson Mandela. We need leaders that are knowledgeable,” he added.
Maharaj ji, who decried insecurity as well as religious and ethnic violence in the nation, said that most people that had wanted to change nation were frustrated by the system.
According to him, for things to change in Nigeria, leaders and followers must prioritise truth, righteousness, justice, fairness and equity.
Maharaj ji, therefore, urged the Independent National Electoral Commission, INEC, to follow laid down rules in the conduct of the 2023 elections to allow credible leaders to emerge for the masses.
He urged policy makers to be honest and transparent about nation’s resources, saying,” we cannot build anything worthwhile and durable until we think like a die hard communist”.
He called for an end to the disagreement between the Federal Government and the Academic Union of Nigerian Universities (ASUU).
The founder, who described as sad the brain drain in Nigeria, said that he was available if the Federal.Government needed counsel on the solution to all problems facing the nation.
Describing the nation’s challenges as spiritual, Maharaj ji said that Nigeria would overcome if it embrace the Great Light.
The founder of One Love Family,.who called on the National Assembly to wake up and provide hope for the nation as people’s representatives, said there was the need for a Divine Government of Love that would touch all aspect of citizen’s life.