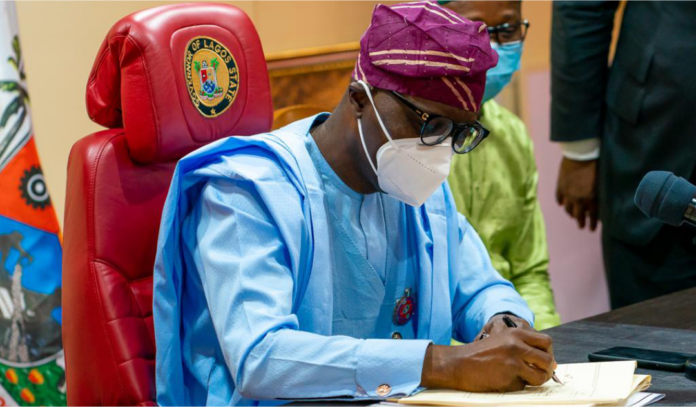 The Commissioner of Information and Strategy in Lagos, Gbenga Omotoso, disclosed this in a statement on Friday.

“The governor signed the ‘bill for a law to impose and charge VAT on certain goods and services’ at about 11:45am today, after returning from an official trip to Abuja.

“By this act, the bill has now become a law,” said Omotoso.

This comes a day after members of the Lagos State House of Assembly passed the VAT bill and another that prohibits the open grazing of cattle in the state.

Both bills were passed after unanimous votes by the lawmakers during a plenary after they were read for the third time.

Following the approval, the Speaker of the House, Mudashiru Obasa, had directed the Acting Clerk of the House, Olalekan Onafeko, to transmit clean copies of the bills to Governor Sanwo-Olu for assent.

While the governor assented to the VAT bill, the statement by the commissioner was silent about the bill prohibiting the open grazing of cattle in Lagos.

Governor Sanwo-Olu signed the VAT bill into law three weeks after his counterpart in Rivers, Governor Nyesom Wike assented to the VAT and Open Rearing and Grazing Prohibition bills, and three others passed by the Rivers State House of Assembly.

Governor Wike was the first to take such action after Rivers State challenged the legality of the Federal Internal Revenue Service (FIRS) to collect VAT – as it has done over the years – at the Federal High Court in Port Harcourt.

This led to a series of litigations and rulings, as Lagos and some state governments indicated their interest to follow in that direction after the coast was clear to collect VAT as a result of the judgement delivered by Justice Stephen Pam.

In a new twist on Friday, a Court of Appeal in Abuja ordered all parties in the matter to maintain the status quo pending the hearing and determination of the suit filed by the FIRS.

The appellate court also refrain from taking action that would give effect to the judgement that allowed the Rivers State government to collect VAT.