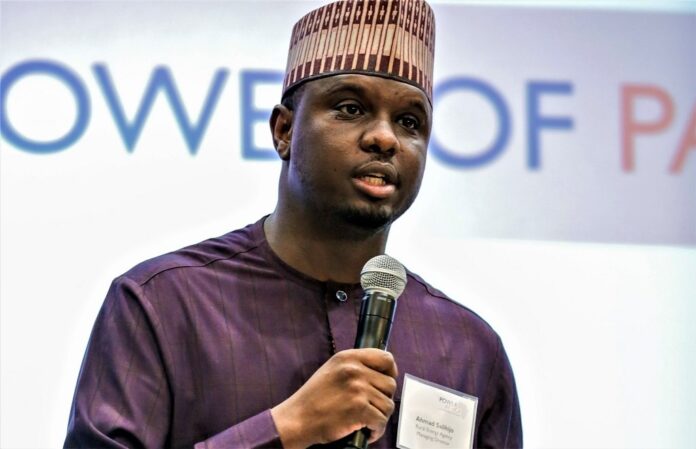 George Orwell was quoted to have said about one of his novels, Animal Farm “If it does not speak for itself, it is a failure.” At the end of the day, the novel did not speak for itself because of what critics refer to as its fanciful treatment of the suppression of a revolution by tyrants.

Also, it is always less successful for anyone to husband the reputation of any public figure without some definite achievements to anchor with.

In that case, the time has come to smash the gloomiest myths about leadership in Nigeria by giving honor to whom it is appropriately due. The Managing Director/CEO of Rural Electrification Agency (REA), Engr. Ahmad Salihijo Ahmad has been a blessing to the agency, Nigeria, and the world at large looking at the arrays of achievements with the support of President Muhammadu Buhari and the Minister of Power, Engr. Aliyu Abubakar.

Supreme leaders determine where generations are going and develop footprints for others to follow.

Their strength of character as well as deep sense of responsibility naturally throws them out as great servant-leaders whose commitment to humanity is never in doubt.

Among the leaders in this category, is Mr. Ahmad. With over two years at the helm of affairs of the agency, Mr. Ahmad has without doubt, uniquely piloted the affairs of REA in delivering on its mandates to electrify unserved and underserved communities to improve quality of life for Nigerians.

Despite FG’s efforts to rid the power sector of setbacks, the industry still faces a myriad of challenges. Only 41.1 per cent of the country’s over 200 million people have access to electricity. Interestingly, 51.4 per cent of this population reside in rural-urban areas. The resultant effect of this is that majority of the people would continue to live in poverty.

But there is good news. The REA, under the leadership of Engr. Ahmad is poised to change the negative trend by providing Nigerians access to reliable electric power supply irrespective of where they live and what they do. The REA boss had since assumption of office as Managing Director, showed unalloyed commitment and capacity to drive the process of growth in the power sector, as communities plunged into darkness in the past are now enjoying clean and renewable energy at home.

According to statistics available to the Nigerian NewsDirect, Rural Electrification Agency, (REA) under the leadership of Engr. Ahmad Salihijo Ahmad, and his team, ably supported by the Executive Director, Rural Electrification Fund, Dr. Sanusi Ohiare, and other board and management executives, has witnessed an unprecedented transformation in a bid to power the majority of rural dwellers in Nigeria.

The effective and coordinated implementation of the Nigerian Electrification Project, involving a $350m facility grant from the World Bank and a $200m sovereign fund from the African Development Bank is a testament to this.

The REA has flagged off and commissioned solar projects across the country like never before in the last three years of the management team headed by Mr. Ahmad. He has unveiled the rural power provision structure of government and translated same into reality through energy efficiency projects that are completed and some are ongoing, located across the six geo-political zones in the country.

For instance, in 2020, the agency commissioned a 234KWP solar hybrid mini-grid in Shimankar, a rural community in Shendam Local Government Area of Plateau State. The project is one of the largest capacity mini-grid deployed by the REA to power a previously unserved community in Nigeria.

The recent commissioning of a 100KWP Solar Hybrid Mini-Grid at Kasuwan Magani, Kajuru LGA, Kaduna State deployed by the REA through a Public-Private Partnership with Blue Camel Energy Limited and REF is another testimony of the efficiency in the REA. The project provides constant and reliable electricity to over 500 shops in the market, 1 commercial Bank, 1 Police Station, and 1 Fire Service Station. A few more of these projects had been commissioned over the last two years and Hundreds more are currently ongoing across the country.

Apart from that, in February this year alone, the agency commissioned a 1.35MW Solar Hybrid Power Project at the Federal University of Petroleum, Effurun (FUPRE), Delta State. The project is the 5th under Phase 1 of the Energizing Education Programme implemented by the REA.

Adebayo community, Ovia South LGA, Edo State also received a boost with the commissioning of a 100KWP Solar Hybrid Mini-Grid Grid Project. Adebayo Community is a community that has existed without electricity for over 60years. One could wonder the level of joy that would envelop that community with the coming of the project.

It also commissioned a 30KWP solar hybrid mini-grid project in the Mbela Lagaje community in Adamawa State. This mini-grid was delivered through REA’s capital projects, as part of its mandate to electrify rural communities.

Speaking in one of the outings, Mr. Ahmad, said the Federal Government is poised to ensure the deployment of equitable electricity to rural dwellers across every nook and cranny of Nigeria.

According to him, powering these communities is another testament to the impact of REA’s off-grid solutions. I’m delighted that with this intervention, Mbela-Lagaje will witness an upgrade in its socioeconomic status.

“I also strongly believe just as we have seen in other communities where these interventions have been deployed, that the quality of lives will be improved and both the young and the old will have the opportunity to explore the possibilities derived from clean, safe, and reliable electricity.

“True national development happens when there is the equitable deployment of such sustainable interventions.

Leveraging on the leadership and support of the federal ministry of power, we will ensure that unserved and underserved communities across Nigeria continue to feel the impact of the federal government’s energy interventions,” he said.

In addition to his commitment to deliver affordable electricity to underserved areas, Mr. Ahmad in his wisdom led the agency to enter into a partnership with the Development Bank of Nigeria (DBN), on “Access to Finance.”

The partnership between the two organizations was aimed at providing affordable debt financing for REA projects, including the REF Call 2 projects, through selected commercial banks. Generally, this is geared towards creating an avenue for mini-grid developers from the recently finalized REF Call 2, while engaging with financiers, development finance institutions as well as digital financial institutions within the solar space in Nigeria to access debt financing.

In May this year, the REA boss was able to pull the agency through a partnership with six companies on the Output-Based Fund (OBF) agreement under the Standalone Solar Homes System component of the Nigeria Electrification Project (NEP).

With the signing of the grant agreements, about 75,953 SHS Units were expected added to the existing 200,000 SHS connections since the project was launched in 2019.

It is also worthy to note the role played by the REA MD during the COVID-19 outbreak last year.

He ensured that the agency supported the Federal Government efforts in cushioning the effect of the pandemic.

The agency had energized four health facilities through its solar hybrid mini-grid plants.

Still, the leadership of the agency has continued to sustain the momentum. There has been a lot of interest in how technology can be used to solve energy problems in Nigeria. Therefore, in a clear bid to accelerate the adoption of technologies in the renewable energy space, the organization recently launched the REA’s research and Innovation hub aimed at stimulating innovative ideas that can help drive positive impact in the renewable energy space.

“What we have found is that there is a lot of interest in bringing in various technologies such as the biomass, small hydros, and coal chains to see how we can use that to electrify rural areas.”

“We are currently in the process of identifying and selecting some private sector players that are willing to come in and demonstrate viable technologies,’ he stated.

The government has formulated relevant policies to extend minimum use of electricity to secondary schools and primary health institutions; however, the power sector reforms became a reality when the government through the REA opted to provide clean and renewable energy in Federal Universities and University Teaching Hospitals across the country, and the program has been extended to secondary schools and primary health centers.

No doubt Ahmad’s pages of achievements in Nigeria’s rural electrification are seemingly conspicuous, to this end, it is gain to say jolly cheers to the Man of the Moment, Engr. Ahmad Salihijo Ahmad.