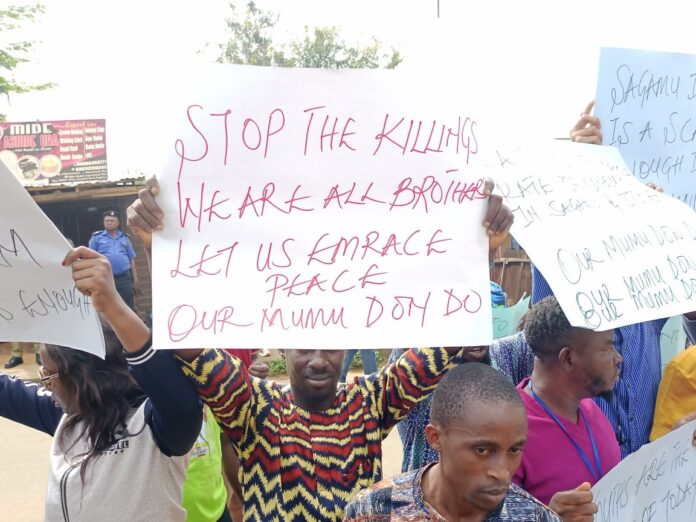 Hundreds of Sagamu youths under the aegis of Concerned Sagamu Stakeholders took to the street on Wednesday to protest the frequent deadly cult killings in the town that was said to have led to loss of at least 10 lives in the last two weeks.

The youths who took off from the Sagamu town hall and marched through Falawo Market, Ita Oba and Isale Oko were armed with various placards bearing messages such as “These killings must stop, let’s embrace peace, we are all brothers”, “We say no to cultism, unity we stand, divided we fall” among others.

The youth equally protested the erratic power supply to the town as well as the penchant of Ibadan Electricity Distribution Company (IBEDC) for giving the residents of the town outrageous billings despite absence of power supply.

The youth led by Comr. Kayode Segun-Okeowo also protested against rising unemployment in the town blaming this on the refusal of many companies operating within and around Sagamu to give employment opportunities to youths of the town.

Speaking during the protest, Comr Kayode Segun-Okeowo
stated that the rise in cult killings in Sagamu has come to a peak of communal shame for the town saying that there is absolute and compulsory need for all Sagamu sons, daughters and residents to as a matter of must, rise up and raise their voice against every act of cult killing in the town and not minding whose ox is gored.

He said “let us all be reminded that Sagamu is a great town blessed with many economic, business and social potentials, but not many of us knows that the recent cult killings are enough to disturb, destroy and disrupt the great potential status of the town”.

The youth leader explained further that this is the reason why government at all levels, security agencies, traditional rulers, Baales, community leaders, youth leaders and other stakeholders must come together and join forces to battle cult killings and ensure a compulsory peace reconciliation among all the warring groups.

He highlighted evil of cultism to include untimely death, loss of moral and social values, jail sentence, incomplete education, drug addiction, mental illness among other.

Speaking on the problem of epileptic power supply and billings not commensurate with actual power consumed, Oke-owo said “there are cases of many communities in Sagamu not having light for weeks and months, yet electricity bills kept flying to this places.

“You will again agree with us that IBEDC is making us pay for electricity we don’t consume. Even in most cases, the transformers, cables and other materials  being used by IBEDC are provided by the people but only for them to claim ownership of our collective efforts and sweats.

The youths also said IBEDC must ensure and begin a process of supply of free prepaid meters to all electricity consumers in Sagamu while also cancelling all questionable accumulated debts based on estimated billings prior to the mandated installation of prepaid metres.

The youth said “We say enough is enough to IBEDC exploitations and extortions on the good people of Sagamu. We are using this medium to send a very strong warning to IBEDC management not to attempt to disregard any of our demands”.

On the issue of unemployment, the youth warned that it will no longer tolerate a situation whereby companies operating in and around Sagamu will rather give available job opportunities to non indigines while the youths of the town who have what it take to do the same job would be abandoned.

The youth threatened further that “without minding whose ox is gored, we shall be visiting companies in days time as such, want to know how many Sagamites are being gainfully employed in those industries because you all can’t built your companies on our land and refused to employ our people.

“It’s so shameful that due to our proximity to Lagos, our great and prudent Youths keep traveling to Lagos and other neighboring states in search for greener pastures while we have industries in our domain”.