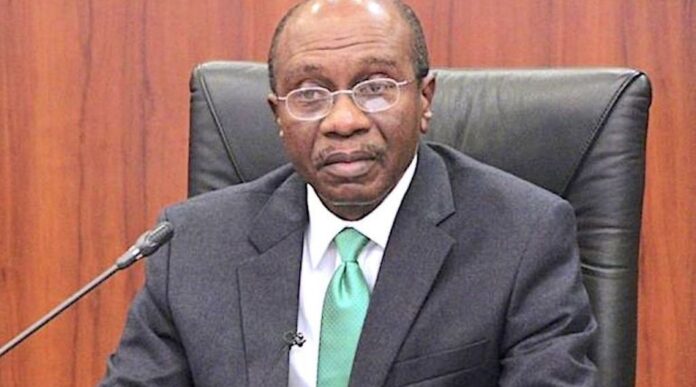 By Uthman Salami and Kayode Tokede

The Central Bank of Nigeria (CBN) on Thursday reassured depositors, creditors and other stakeholders of First Bank Nigeria and FBN Holdings Plc that  there  is no cause for panic among the banking public, stressing that the actions being taken are meant to strengthen the bank and position it as a banking industry giant. This assurance by the CBN follows the announcement of the  immediate removal of all directors of First Bank of Nigeria Ltd. and FBN Holdings Plc over purported management changes at the bank without the approval of the CBN.

The CBN Governor, Mr. Godwin Emefiele in a statement titled “The Purported Management Change at the First Bank of Nigeria Ltd” expressed the commitment of the apex bank to the stability of the financial system  announced the appointment of Mr. Remi Babalola as the Chairman of FBN Holdings.

On the other hand, Mr. Tunde Hassan-Odukale was appointed as the Chairman of FirstBank.

The CBN governor in his statement said, “Ordinarily the board is vested with the authority to make changes in the management team subject to CBN approval. However, the CBN considers itself a key stakeholder in management changes involving FBN due to the forbearances and close monitoring by the Bank over the last 5 years aimed at stemming the slide in the going concern status of the bank.

“It was therefore surprising for the CBN to learn through media reports that the board of directors of FBN, a systemically important bank under regulatory forbearance regime had effected sweeping changes in executive management without engagement and/or prior notice to the regulatory authorities. The action by the board of FBN sends a negative signal to the market on the stability of leadership on the board and management and it is in light of the foregoing that the CBN queried the board of directors on the unfortunate developments at the bank.

“As you may be aware, FBN is one of the systemically important banks in the Nigerian banking sector given its historical significance, balance sheet size, large customer base and high level of interconnectedness with other financial service providers, amongst others.

“By our last assessment, FBN has over 31million customers, with deposit base of N4.2trillion, shareholders funds of N618billion  and NIBSS instant  payment (NIP) processing capacity of 22 per cent of the industry.  To us at the CBN, not only is it imperative to protect the minority shareholders, that have no voice to air their views, also important, is the protection of the over 31million customers of the bank who see FBN as a safe haven for their hard-earned savings.

“The bank maintained healthy operations up until 2016 financial year when the CBN’s target examination revealed that the bank was in grave financial condition with its capital adequacy ratio (CAR) and non-performing loans ratio (NPL) substantially breaching acceptable  prudential standards.

“The problems at the bank were attributed to bad credit decisions, significant and non-performing insider loans and poor corporate governance practices. The shareholders of the bank and FBN Holding also lacked the capacity to recapitalize the bank to minimum requirements. This conclusions arose from various entreaties by the CBN to them to recapitalize.

“The CBN stepped in to stabilize the bank in its quest to maintain financial stability, especially given FBN’s systemic importance as enumerated earlier. Regulatory action taken by the CBN in this regard included: Change of management team under the CBN’s supervision with the appointment of a new Managing Director/ Chief Executive Office in January 2016.

“Grant of the regulatory forbearances to enable the bank work out its non-performing loans through provision for write off of at least N150billion from its earning for four consecutive years.

“The measures had yielded the expected results as the financial condition of FBN improved progressively between 2016 when the forbearance was initially granted to the current financial year. For instance, profitability, liquidity and CAR improved whilst NPL reduced significantly.

“Notwithstanding the significant improvement in the bank’s financial condition with positive trajectory of financial soundness indicators, the insider related facilities remained problematic.

“The insiders who took loans in the bank, with controlling influence on the board of directors, failed to adhere to the terms for the restructuring of their credit facilities which contributed to the poor financial state of the bank.

“The CBN’s recent target examination as at December 31, 2020 revealed that insider loans were materially non-compliant with restructure terms (e.g. non perfection of lien on shares/collateral arrangements) for over 3 years despite several regulatory reminders.  The bank has not also divest its non-permissible holdings in non-financial entities in line with regulatory directives.”

However, stakeholders in the banking sector  expressed mixed feelings over the apex banks action.

Certain Shareholders of the bank who spoke with Nigerian NewsDirect expressed dissatisfaction over the actions, stressing that the apex bank failed to consult with shareholders before suspending the entire directors of Holdco and Limited.

The Founder of Independent Shareholders Association, Sir Sunny Nwosu said loan transaction, lending, and placement is a private business of the borrower and the bank, stressing that CBN does not possess the power to interfere in FBN HoldCo decisions.

According to him, “CBN cannot punish all the owners of the bank for the crime of one person. If there are internal crisis, the role of CBN is to resolve it.

“CBN has taken a big whip and dissolve the HoldCo which is not under the CBN supervision. Asking shareholders to intervene after you have dissolved, does not make any sense to me.

“At least there was due diligence from the bank before the loans were granted to these institutions. It is for the bank to speak and as you know they may not come out to speak because of the nature of our regulating bodies in this country.

“There is no clear explanation to the retirement of the Bank’s CEO. They should allow the world to know the reason they arrived at that decision. First Bank as a legacy institution should not hide anything from their stakeholders concerning the position they have taken.”

Reacting also, the Chairman, Progressive Shareholders Association of Nigeria, Mr.  Boniface Okezie faulted the CBN decision at removing the board of FBN HoldCo, also calling on the CBN to disclose in details what transpired.

According to him, “The function of the board is to make decision. When the board removed the MD of a bank, is it Oba Otudeko that removed him? The bank is a limited liability company that has its own board. Otudeko has only one vote to cast.

“They have not told us why they removed him and the reason behind it. It is not proper to revert the decision the board had taken.

“CBN cannot run the activities of the First Bank as we are not operating a military rule.  This is a civilian rule where everybody has rights.

“CBN is a regulator and cannot tell the board on how to make decisions. CBN should act on the decision of the board not against it. Its role is basically advisory not Lord and servant. CBN is creating more problems in the banking sector.”

A financial expert, Prof. Uche Uwaleke expressed his support for the decision of the CBN to dissolve the directors of First Bank Nigeria and FBN Holdings.

According to him, the CBN wielding the big stick on any bank that flouts the rules.

“A Banking system regulator should be seen to take the issue of corporate governance very seriously.

“In this particular matter, my take is that the apex Bank is in order in view of the fact that it gave the Board of First Bank the opportunity to defend itself.

“It behoves the CBN now to communicate the reasons for its action to members of the public and provide reassurance of Banking system stability,” he added.

Our correspondent gathered that FBN Holdings share price dropped by 6.76 per cent to close at N6.90 per share on Thursday.

On Wednesday, the Board of Directors of First Bank of Nigeria Limited said that it had appointed Gbenga Shobo as its Managing Director/Chief Executive Officer (CEO). Shobo’s appointment followed the news that the former MD/CEO, Dr Adesola Adeduntan, had retired.

But the CBN had flagged that transition process and said it has no justification because Dr Adeduntan’s tenure has not yet run out, and there was no notification from First Bank to the CBN over the transition.

In a memo seen by our correspondent dated April 28, 2021, the CBN stated, “The attention of the CBN has been drawn to media reports that the Board of Directors has approved the removal of the current Managing Director of the bank, Dr Sola Adeduntan, and appointed a successor to replace him. The CBN notes with concern that the action was taken without due consultation with the regulatory authorities, especially given the systemic importance of First Bank Ltd.”

In 2013, a N5.5 billion loan facility given to Oba Otudeko’s Honeywell Flour Mills by Ecobank became the subject of litigation and is in fact still ongoing at the Supreme Court.

According to one banking insider, “In a round about way, First Bank now owns the assets pledged to Ecobank.”

“So the same asset (Honeywell and Airtel) is allegedly pledged to Ecobank and none of the banks can move in on these assets. First Bank has an equity position while Ecobank has a debt position.”

CBN had said that it has previously written to First Bank about its interests in the Honeywell Group. One big regulatory concern was Honeywell Flour Mill’s collateral for the loan facility.

According to the memo, “We further noted that in four years, the bank is yet to perfect its lien on the shares of Mr Oba Otudeko in FBN HoldCo which collateralised the restructured credit facilities for Honeywell Flour Mills contrary to the conditions precedent for the restructuring of the company’s credit facility.”

In simple terms, First Bank does not have a binding document filed with the CBN that will allow it legally claim the collateral if there’s a default on the loan.

One report from 2017 claims that the loan facility is in the region of N75 billion and was non-performing before a recent restructuring. Yet, the apex bank is concerned that First Bank may not have performed its due diligence in securing the collateral for the credit facility.