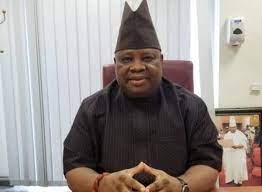 Osun State Governor, Senator Ademola Adeleke has said his government will be fair to all.  He, on Monday, expressed his readiness to work with Osun State House of Assembly to move the State forward and deliver expected dividend of democracy to the people of the state.

Adeleke who disclosed this during a courtesy visit to the House of Assembly, said the time for politics is over and focus should be shifted on working together for the benefit of the people.

He said his administration will be fair and just in the discharge of the responsibility of office, assuring the state legislature of close partnership in state governance as dictated by the law.

“Let us all accept the fact that election is over, and the focus now should be how to affect governance. I want to assure you here that my government will be fair to all. There should not be PDP or APC or any other party, for that matter, in our considerations, but delivering governance to Osun people.

“I want Osun to be first – a reference point in governance. This is possible if we work together for our people, as our collaboration will ensure a peaceful state, and make it easier for investors to come here,” he said.

The Governor hailed the Assembly under the leadership of Rt. Hon. Timothy Owoeye, for the maturity and understanding demonstrated so far, noting the readiness of his administration to fully partner with them in taking Osun State to greater heights.

“The naysayers had hoped that by now, Osun will go up in flames as a result of friction between the House and the Executive, but that is not happening. This is why I must commend the House, particularly the leadership, Mr Speaker, for putting the interest of the people of the State above every other consideration.

“It is my expectation that we continue on this path as that is what will bring the needed benefits for Osun people. This administration considers the House as an important partner, and I want to assure you that we will be open and fair to you,” he added.

In his remarks, the Speaker of the House of Assembly, Rt. Hon. Timothy Owoeye said that the Assembly will do everything to support government, noting that they may only disagree with the executive based on facts of the law and not sentiments.

Owoeye stressed that the legislative arm and executive must strengthen its communication channels so as to communicate effectively, devoid of fake news and rumour mongering.

He assured that the 7th Assembly under his watch will not be blinded by party affiliation, stating that the Assembly owes it a duty to the people and future generation to rise above petty party politics and deliver the dividends of democracy to the good people of Osun.

He said that the legislature world over is a sacred and respectful institution and as such, the opinions and resolutions of the arm is pivotal in every matter of state.

He said,“Your Excellency, you and your team have the utmost task of strengthening the Executive-Legislative relationship. It is most important considering the differences in ideology of our political parties. We must also allow the rule of law to guide our actions, behavior and activities this period.

“On a personal note, I want to beseech you to surround yourself with men of valour, value and honour, who will give the best of advice that will advance the lives of our people. Your activities and that of your team must at all time be in tandem with the principle of separation of powers and mutual respect for each arm of government.

“Mr Governor, I am happy that you have at some point served in this arm as a distinguished senator of the Federal Republic of Nigeria. This enormous task of acting right and staying on that path lies with the legislative arm and we as the accredited representatives of our people have sworn to continue in this path.

“Under my leadership, be rest assured that this Assembly will support your administration according to best global practices. Also, it is important that your administration continue to uphold the rule of law and principles of fair hearing. Any deviation from this path may lead to state of anarchy and crisis.”