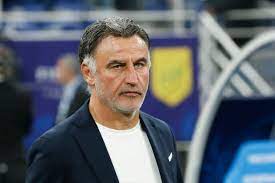 Christophe Galtier has been confirmed as the new Paris Saint-Germain (PSG) head coach after Mauricio Pochettino left the French Ligue 1 champions on Tuesday.

PSG won the league by a margin of 15 points in the 2021/2022 season, but Pochettino departed on Tuesday following his failure to deliver their first UEFA Champions League title.

Now, Galtier is the man who has been trusted to take over at PSG, strongly supported by new sporting director Luis Campos.

Campos and Galtier have worked together previously when they combined at Lille to create the team that pipped PSG to the Ligue 1 title by a point in 2020/2021.

But he spent only a single season on the French Riviera — finishing fifth and reaching the Coupe de France final — before leaving late last month.

Nice have since brought back Lucien Favre as his replacement.

That move came as speculation persisted around Galtier’s move to PSG, with Pochettino’s exit anticipated since the end of last season.

Their latest failure in the competition came in a second-leg collapse against eventual winners Real Madrid in the last 16 state of the 2021/2022 competition.