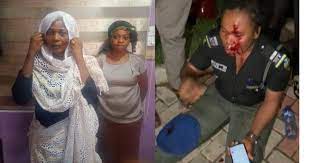 A magistrate’s court sitting in Wuse, Federal Capital Territory (FCT), Abuja, has remanded Prof Zainab Duke Abiola in Suleja Prison over the assault of Inspector Teju Moses, a police orderly attached to her.

The professor was arraigned alongside her domestic aide, Rebecca Enechido, on Friday.

In a video clip that went viral on Wednesday, the officer was seen seated on the floor and asking to be taken to the hospital for medical attention while bleeding.
Force Public Relations Officer, CSP Muyiwa Adejobi, had confirmed the incident, saying the IGP ordered her arrest.

According to newsmen report, at the court on Friday, the professor was denied bail while the matter was adjourned till October 5, 2022.

The magistrate also ordered that she should be remanded in Suleja Prison pending the adjourned date.

Earlier, Abiola had denied assaulting the officer, saying it was strange that the IGP would forcefully violate “the fundamental Rights and liberties of a distinguished law- abiding citizen and proceed to forcefully take her pictures and maliciously publish same in the print and electronic media in this nascent democratic dispensation.”