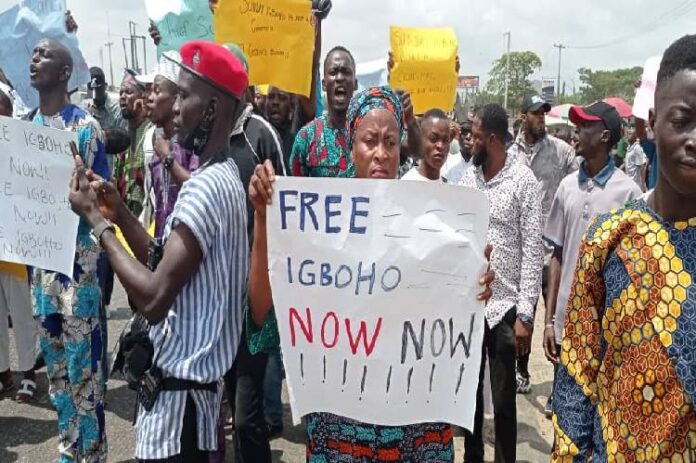 Armed policemen have dispersed supporters of Chief Sunday Adeyemo, aka Sunday Igboho, who staged a protest in Ibadan against the arrest of the Yoruba nation agitator.

Igboho was arrested Monday night in Cotonou, Benin Republic on his way to Germany. His wife, Ropo, was with him and she was also arrested.

Both of them are currently being detained in Benin Republic. However, the Federal Government has not said anything about Igboho’s arrest and detention in the foreign country.

The protesters were said to have marched to Soka Bus Stop along the Lagos-Ibadan Expressway, where they sang some songs  and demanded the release of Igboho.

Residents said the protesters, who were armed with placards bearing various inscriptions, included males and females.

They were said to have called on Yoruba leaders and the international community to fight for the release of Igboho.

One of the street hawkers at Soka Bus Stop told our correspondent that Igboho’s supporters sang repeatedly, warning the Federal Government not to kill Igboho the way Chief MKO Abiola was allegedly killed.

The street hawker said the protest grounded traffic in the area and some motorists who were conversant with the situation had to take alternative routes to avoid the area.

A resident of the area who identified himself as Musbau Ogunbiyi said the protest started at about 1.50 p.m.

He said, “The policemen came in about four patrol vans and a car. They shot in the air and chased away the protesters.”

But another resident, Taye Adeoti, said the protesters marched towards Challenge Area after spending some minutes at the bus stop.

Our correspondent who witnessed the incident observed that the armed policemen had taken over the place around 3.30pm.

The policemen stationed themselves at strategic positions at the location. After clearing the traffic, they stayed for a while before they finally left.