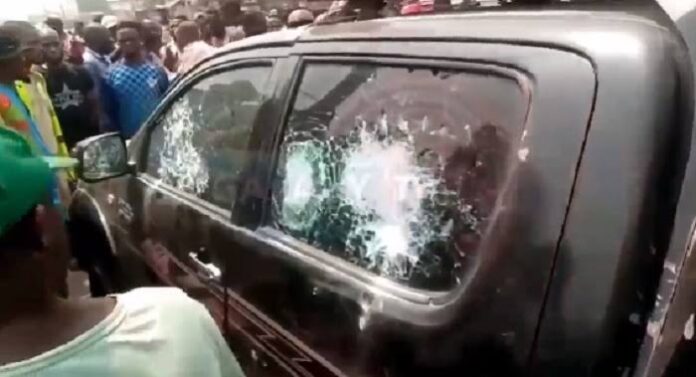 The Police Command in Abia has confirmed Tuesday’s attack on a bullion van and killing of a bank official by gunmen on the Umuahia axis of Enugu-Port Harcourt Expressway.

The Command’s Public Relations Officer (PRO), SP Geoffrey Ogbonna, confirmed the incident in a statement issued in Umuahia on Wednesday.

Ogbonna stated that the incident happened around 1:13 p.m. at Ntigha junction, near Umuahia.

He said that the bullion van conveying cash from a new generation bank in Aba to Umuahia ran into the blockade mounted by the suspected robbers.

The Police Spokesman stated that the van was being escorted by six mobile policemen attached to 28 PMF Umuahia and Counter-terrorist Unit Base 4, Aba, when the incident happened.

He stated that the robbers opened fire at the bullion van, thus forcing the driver to swerve into the bush.

Ogbonna further disclosed that the driver escaped, while the bank’s cash officer was shot dead.

He said that one of the gunmen was neutralised during the gun battle that ensued between them and the police.

Ogbonna also stated that an AK-47 rifle, with ammunition laden in three magazines strapped together and belonging to the hoodlums, was recovered.

He said that three of the escort policemen, who sustained gunshot injuries, were immediately rushed to the hospital, adding that the remains of the bank official and the hoodlum had been deposited at a morgue.

The Police Spokesman explained that investigation into the incident had commenced.

He appealed to the public and proprietors of medical facilities in and outside Abia to report any person seen or presented with suspected gunshot injuries to the police or any other security agency.