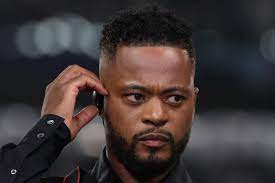 Patrice Evra has claimed he was offered the role of Manchester United sporting director.

The Frenchman was signed by Sir Alex Ferguson in 2006 and spent eight years at Old Trafford.

Evra left United after Ferguson’s retirement and has since watched the club fall from grace, as they are currently on a five-year trophyless run.

Darren Fletcher was recently brought in as technical director, but Evra has now revealed he was also offered a position with his former club.

“I passed my coaching diplomas and received lots of offers, including becoming a United sporting director,” Evra told L’Equipe.

He claimed back in 2019 that talks were being held as he aimed to restore the club to the success of yesteryear.

“I am having some important talks behind the scenes so we will decide whether I work for the club in a certain role. The problem is I want to do everything, but in life, you can’t do everything.

“But yeah, a role where I can get my hands dirty. If I come back to the club, it’s not just to put my face on it, it’s because I want my club to go back to the best club in the world.

He also said “As a player, I sacrificed my life to succeed at this club, so I don’t know which role I will have but I will do the same.”