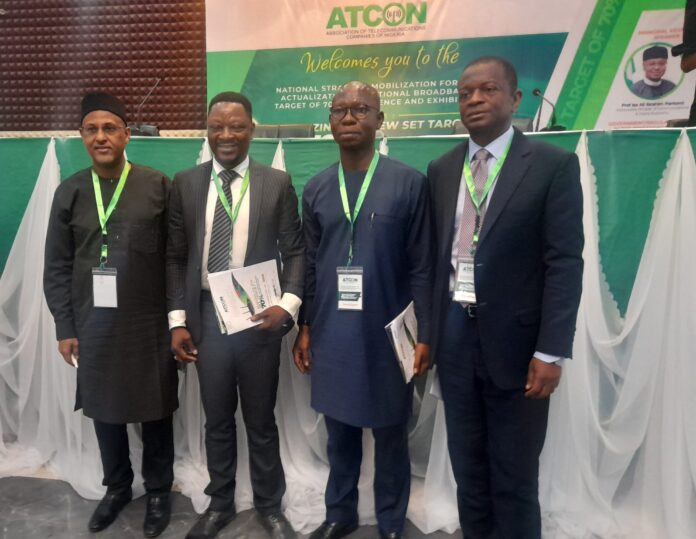 Nigerian NewsDirect learnt that this was organised by ATCON with a theme – ‘Realising the New Set Target of 70% of Broadband Penetration,’ held recently in Abuja.

Pantami said the Federal Government has set out an ambitious target to deepen broadband penetration in Nigeria under the National Broadband Plan (2020-2025), adding that the implementation of the Plan would contribute to the economic growth of the nation.

He noted to achieve the target requires the strong collaboration of the private and public sectors, adding that all hands must be on deck in the quest to achieving the target.

The minister however identified lack of  access to funding and inefficiencies in the power supply in the country as well as the issue of Right of Ways as major constraints militating against the implementation of the Plan.

Also speaking, the Governor of Lagos State, Babajide Sanwo-Olu, said Lagos State is leading on the Ease of Doing Business Index among other sub-nationals as a result of far reaching reforms in critical areas that directly affect the establishment of new businesses and the operation of existing ones within a relatively conducive environment.

Sanwo-Olu who was represented by Engr Bisoye Coker Odusote, General Manager, Lagos State Infrastructure Maintenance and Regulatory Agency (LASIMRA), said as a result of digitisation of processes and procedures in the State, there has been a reduction of processing period for planning permits from 28 days to 10 days, adding that “we are still working on making the period even shorter.”

Commenting on fibre infrastructure, he said the State has embarked on the deployment of High Density Duct pipes towards achieving the main objectives of creating a technology enabled and  sustainable smart city.

“Our objective as a government is to create a technology-driven city by an Open Access Unified Duct/Fibre infrastructure/backbone for up to 3,000km of metro fibre across all local government areas in the State, in the first instance.

“The fibre optics laying will fast track higher bandwidth which will translate to faster internet speed with stronger security.

“The deployment of the unified fibre duct infrastructure is meant for carrying telecommunications cables and other wired infrastructure.

“This project will support telecommunications operators and other relevant utilities, as well as the infrastructure required for the LagosState Government’s connectivity requirement.

“On our part in Lagos State, we are committed and will continue to put in the needed effort because, achieving improved broadband penetration is critical to improving ease of doing business and building a more efficient, productive and competitive economy through digitisation,” he assured.

Earlier in his welcome address, President of ATCON, Engr. Ikechukwu Nnamani, revealed that the Conference was organised with a view to proffering lasting solutions to issues that are likely to constitute as obstacles to the actualisation of National Broadband Target of 70% before the expiration of the National Broadband Plan 2020-2025.

Nnamani further said, “As often the case with us at ATCON, the strategic objectives of this very important event are to complement the various strategic activities already embarked upon by the Federal Ministry of Communications and Digital Economy and all the agencies under the Ministry to achieve the set target of broadband penetration in Nigeria with great speed.

“To leverage the wide spectrum of ATCON’s sub-groups for effective participation in the new Nigerian National Broadband Plan 2020-2025 by giving them the opportunity to access the plan and suggest various ways to speed up the realisation of the established target by the government and also serve as a veritable platform to galvanise the needed input that reflect the thinkings of the telecom and ICT sector.

“This is an opportunity to review the relevance of the Nigerian policy environment vis-a-vis the telecom operating environment.”