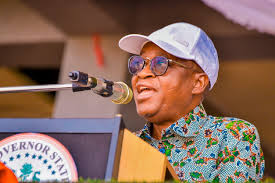 … as NLC, TUC, others rally support for Oyetola’s re-election

Organised Labour groups in Osun State have said the incumbent governor and candidate of the All Progressives Congress, Adegboyega Oyetola, has shown to the world that it is possible to make governance devoid of rancour and needless suspicion between Labour movement and government.

This is as Governor Adegboyega reaffirmed his commitment to the welfare of workers in the state, if re-elected.

Speaking on behalf of the Labour movement at the re-election rally for the governor at Nelson Mandela Freedom Park on Wednesday, the Chairman of the Joint Negotiation Movement, Comrade Bayo Adejumo, said Governor Oyetola has walked the talk in the last three and a half years, adding that he has built the requisite blocks for sustainable prosperity.

According to him; “Today, which is set aside by the Labour Movement to recognise, appreciate and commemorate the historic welfare and gains made by workers and the Labour Movement in Osun state under the very dynamic administration of Governor Oyetola in the overall development of this state without compromising the welfare of all workers in the public service.

“Through your toil, persistence, resilience, sacrifice and unflinching commitment, you have built a great state. Since this administration came to office and up till now, you have truly revitalised the economy that is alive to the deepest yearnings of our people, and focused on creating enduring wealth in pursuit of well-focused development agenda.

“You have walked the talk, you have delivered and still delivering on your avowed development mandate, putting smiles on the faces of our people, and building the requisite blocks for sustainable prosperity.

“You have shown to the world that it is possible to make governance work and devoid of rancour and needless suspicion between Labour movement and government. Your integrity in honouring all agreements with workers has made this possible. We encourage other leaders in Nigeria across sectors and culture to emulate your laudable template of industrial relations.

“The crowd of workers across the entire state being witnessed here today is a pointer to the cordial relationship between the organised Labour and the government. It is a healthy development as it showcases you as a dependable ally in the quest for our societal transformation drive.

“This friendly atmosphere has made it possible to the extent that the Labour movement in the state has not even threatened a single strike for once because you are always alive and timeous in taking useful decisions that will herald workers welfare”, Adejumo said.

Reacting to the situation, Kano state governor, Abdullahi Ganduje, lauded Osun workers for the gesture, saying the endorsement was a testament to Oyetola’s outstanding contribution to a re-energised public service in the state.

“I am happy that you appreciate the contributions of your governor to the overall outlook of Labour. I was here during the last election, and I can say that the positive changes over the last three and a half years have been interesting. What we are seeing here is an indication of your absolute commitment to his re-election come Saturday, and we believe that victory is assured by the grace of God”, Ganduje said.

Osun Head of Service, Dr Festus Oyebade, described the rally as an open alignment with Governor Oyetola, adding that a leader who has exceeded expectations deserve maximum support.

“We are not endorsing the governor cowardly or in clandestine fashion, we are doing it with utmost assurance and open identification.

“Mr Governor, we want to thank you for what you stand for – a man of integrity, honour and resilience. You have proven that you were physically, mentally and spiritually prepared for this office, and we stand upon the threshold of workers in this state to declare that on your mandate we shall stand.

“During the period of Covid-19, when many governors in Nigeria were slashing salaries, you remained faithful to full salary. You resolved the issue of our outstanding promotion. You went further to sort the issue of pension and gratuity, which at the last check in May, you have expended 48 Billion Naira. Osun workers trust you, regardless of what the opposition are insinuating that you are only baiting us”, Oyebade said.

While addressing thousands of workers, Oyetola dismissed insinuations that he was baiting workers, openly reassuring that workers’ welfare will remain his priority.

Oyetola said he is sure that his second term in office hold greater promise than the first, if re-elected, saying that issues pertaining to the welfare of workers can only get better with him in the saddle.

“Anytime I see Labour standing by me, I feel fulfilled. Your support in 2018 contributed immensely to my becoming a governor today. I made a promise in 2018 that your welfare will be my priority and I kept to it. Let me reassure you that as long as I remain governor, my commitment stands.

“Second term will definitely be better than the first. The insinuations in some quarters that my commitment will dwindle will never happen in this our Osun as long as I’m in the saddle. Oppositions are confused about the strengthened ties government and Labour are enjoying in Osun, but their inability to unravel the mystery has given birth to many unfounded insinuations. They cannot understand it”, Oyetola said.