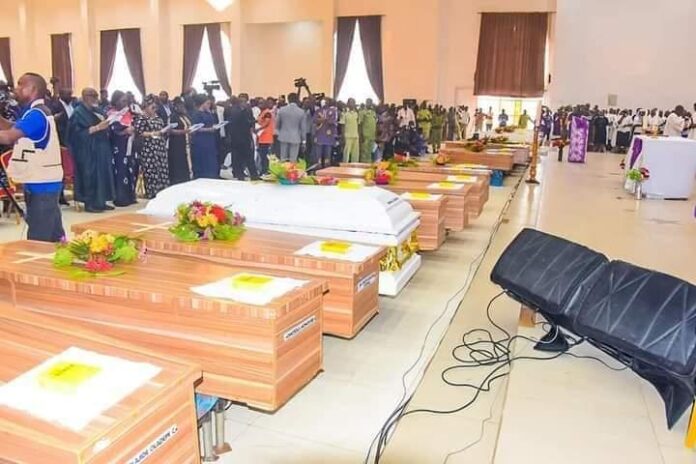 It was solemn on Friday in Owo, the hometown of the state governor, Oluwarotimi Akeredolu, Ondo state as the 40 victims of the deadly attack on St. Francis Catholic Church, Owa-luwa street have been laid to rest in the town.

Our Correspondent, who was at the funeral mass held at Midas Hotel Owo, the venue of the church service, reports that after the funeral mass was completed, families of the victims took the remains of their loved ones for burial in the town.

Recall that no fewer than 40 persons were killed in the attack which has received wide condemnation across the country.

At the funeral mass service, the identities of 39 people including children who lost their lives in the terrorist attack were released.

The names and pictures of the victims were released by the church in the printed copy of the programme of events for their funeral service on Friday.

While a mass burial has taken place at the church’s new cemetery at Emure Road, Owo, it was however learnt that some families prefer to have a private burial for some of those killed.

In his message, the Catholic Bishop of Ondo Diocese, Jude Arogundade challenged the federal government to hearken to the cries of Nigerians for the creation of state police to protect the lives of the people.

Arogundade, who betrayed emotions in his message said Nigerians must rise up to speak and demonstrate its strength and oneness to defeat terror attacks from evil minded groups.

He, however, appreciated Ondo state governor for accepting the offer to have a burial site in honor of the people killed.

Akeredolu disclosed that seventy victims were still receiving treatment at various hospitals while some had already been buried by their loved ones.