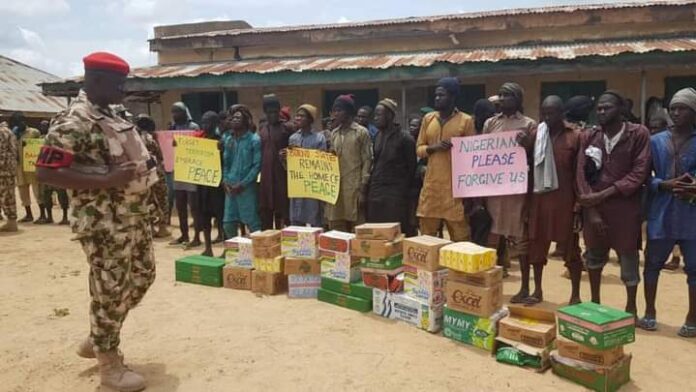 The Nigerian Army on Tuesday said at least 1,000 Boko Haram/Islamic State West Africa Province (ISWAP) members have laid down their arms and surrendered to its troops in Borno State.

The Army spokesperson, Onyema Nwachukwu, responding to report that it freed two senior Boko Haram bomb experts after rehabilitation said, the army does not want to be distracted from its main focus of dealing decisively with the threat against peace loving Nigerians.

In Tuesday’s statement, the army stated that it would continue to operate according to the Nigeria’s constitution.

The statement also said all the surrendered terrorists would be received, processed and passed on to the relevant agencies of government for further assessment in line with extant provisions.

The Director Army Public Relations, Brigadier General , Onyema Nwachukwu  said, “Our attention has been drawn to a publication by some online news medium released in which the authors deliberately misrepresented the facts contained in that report and twisted it to suit whatever purpose they seek to achieve.

“While the Nigerian Army (NA) does not want to be distracted from its main focus of dealing decisively with the threats against peace loving Nigerians, it has become necessary to put issues in their right perspectives.

“It is a known fact that in the recent past, over 1,000 members of Boko Haram and their families have surrendered to the troops due to the intense pressure from troops’ sustained offensive actions. Among those were key leaders of the terrorist group who have renounced their membership and have turned themselves in.

“The NA being a professional military organisation will continue to act in accordance with the dictates of the Nigerian Constitution, as well as international best practices. It must be known that the NA will never encourage any act of lawlessness or extra judicial killings.

“Accordingly, all surrendered terrorists will be received, processed and passed on to the relevant agencies of Government for further assessment in line with extant provisions.

“The ongoing Operation Safe Corridor is an outfit established by the Federal Government and not the NA. As such, it is absolutely wrong to say that the NA will free repentant terrorists.

“The NA therefore appeals to the public to disregard the deliberate distortion of facts by these online mediums and continue to support the NA in order to rid the country of terrorism and other forms of insecurity.

“The Chief of Army Staff Lieutenant General Faruk Yahaya has reiterated his admonition to all terrorist groups operating in the country to abandon their illegitimate cause and surrender to troops.”

Nwachukwu in a statement had disclosed that Boko Haram terrorists / ISWAP senior commanders, chief bomb expert and families surrender with followers to the troops in Bama Local Government Area of Borno State.

According to his statement, “While distributing new cloths and assorted food items, groceries and toiletries to the surrendered terrorists and their families totalling 335 fighters, 746 adult women and children including one of the abducted Chibok girls, it was observed that the reasons for such massive turn was basically due to the intensified Nigerian military campaign on their enclaves and environs and also with the overwhelming famine, discontent, internal skirmishes, health challenges as well as untold hardship.”

In another development, Global human rights’ body, Amnesty International, has said that no fewer than 112 persons were killed by ravaging murderous Fulani herdsmen and armed gunmen in Kaduna and Plateau states in one month.

In the month under review, 160 persons were also abducted while many communities had been dislodged or reduced to rubbles.

The AI Media Manager in a release on Tuesday, said “At least 112 people were killed, 160 abducted and thousands displaced in communities in Kaduna and Plateau states from July to 5 August 2021,” the statement reads partly.

In the statement, the Director of Amnesty International, Osai Ojigho was quoted as saying, “Our

findings show that despite clear signs that there will be retaliatory attacks, enough is not being done to prevent the bloodshed, thereby fuelling the ongoing circle of violence. Beyond issuing statements and condemning attacks after they happen; government needs to rein in on attackers and bring suspects to justice.”

The statement further reveals, “Amnesty International’s investigation shows at least 78 people were killed and 160 abducted by bandits between 3 July and 5 August 2021 in Kaduna state including 121 school children of Bethel Baptist Church High School.

“At least 34 people have been killed in Plateau state, including 7 herders who were attacked on 1 July at Dogon Gaba, 2 others were lynched at Fusa Village while trying to locate their missing cow.

“Villagers from farming communities, informed Amnesty International that, innocent people and communities that know nothing about the attacks are sometimes targeted for reprisal.

“A retaliatory attack on 31 July and 1 August 2021, led to the killing of at least 17 people, and displacements of hundreds in farming communities in Bassa and Riyom LGAs, Plateau state.”

A 39-year-old farmer informed Amnesty International that, “We have been hearing gunshots in our village since Monday after the attack. We don’t know why we were attacked, I had to relocate to the IDP camp with my family.”

Also leaders of some Fulani herders’ communities in Plateau state told Amnesty International that the inaction of the security operatives have contributed to the recent retaliatory attacks in the state.

“The slow and ineffective response by security officials is contributing to the attacks and reprisal in the state, people are getting away with crimes,” a source told the human rights organisation.

“The Nigerian authorities must act swiftly to prevent such attacks from happening. The slow response from security forces is clearly causing increased in casualties, how much longer must people be forced to live in fear as such brutal attacks continue?” said Ojigho added in the statement.