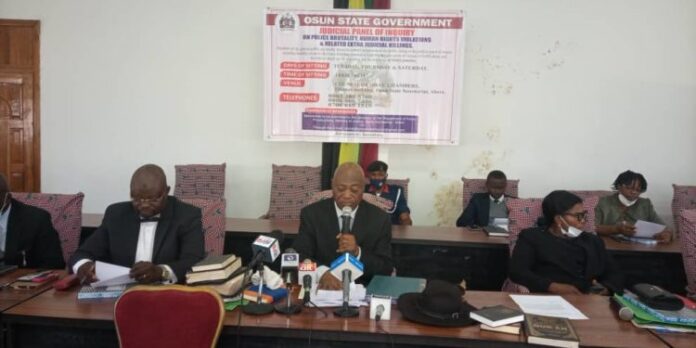 The parents of the boy chased to death by a team of security personnel have lauded the Osun Government for endorsing the report of the Criminal Investigation Department revealing the names and other identities of the alleged officers involved in the murder of their child, Idris Ajibola.

The parents made the commendation at the resumed hearing of the Osun Judicial Panel of Inquiry on Police Brutality Human Rights Violations and Related Extra Judicial Killings on Thursday.

The parents said the revelation of the identities of the alleged erring officers by the government through the Criminal Investigation Department was an indication that the government is a lover of justice and a clear justification of their request for the payment of a sum of N5billion as compensation.

This is even as the Counsel for the petitioners, Barrister Kanmi Ajibola, after the presentation of his final written address for adoption, lauded the panel’s formation and expressed confidence in its ability to dispense justice.

The names of the officers were made public for proper disciplinary actions in their respective Commands.

The late Idris Ajibola alongside his friends were on 15th December, 2020 allegedly chased, leading to the subsequent death of the deceased by a team of security personnel.

Presenting his final written address in the case to the panel, the petitioners’ counsel, Barrister Kanmi Ajibola, argued that the alleged unlawful act perpetrated by the subjects of the Respondent by chasing the late Idris Ajibola to death, causing his parents an irreparable loss, was contrary to Paragraph 33 (1) of the 1999 Constitution, as amended.

According to him, the said Paragraph of the Constitution provides that, “Every person has a right to life, and no one shall be deprived intentionally of his life, save in execution of the sentence of a court in respect of a criminal offence of which he has been found guilty in Nigeria.”

Barrister Ajibola who described the steps taken by the government to unveil the identity of the occupants of the JTF vehicle that allegedly chased the deceased to death as commendable, said the action has further informed the petitioners the need to pursue the case to finality by ensuring that whoever is found culpable is dealt with in accordance with the Constitution.

He commended government for not covering up the matter after the names of the officers were made known by the Criminal Investigation Department of the Nigeria Police Force assigned to investigate the matter.

Addressing journalists after the closure of their cases, mother of the deceased, Mrs. Titilayo Ajibola, commended the State government for unveiling the identities of the officers who were in the security vehicle that chased her son to death.

Mrs. Ajibola said the unveiling of the identities of the alleged erring officers was an indication of the fact that their case before the panel was genuine.

The petitioner who was accompanied by her husband and other members of the family said the request for the sum of N5billion compensation was to cushion the trauma experienced from the incident as the deceased was the only male child of the family.

A copy of the police investigation report forwarded by the government indicated that the incident that claimed the life of one Idris Ajibola (male), 17 years old,  among the four occupants of the Toyota Corrola Sallon vehicle number ABUJA KUJ 553 LY, was assigned to State Criminal Investigation Department, Nigeria Police Force, Osogbo for discreet investigation and report.

“Consequent upon the investigation, the following: Ejigbo Audu (NPF); Benjamin Ogunsesan (NPF); Jekayinfa Olutosin (NSCDC); Raji Adewale (SSS); and Hammed Yusuf (NAF), who occupied the JTF patrol team 004 surveillance patrol vehicle on the fateful day of the accident, 15th September, 2020 have been recommended for withdrawal from the Joint Task Force (JTF) and to face departmental disciplinary action in their various commands,” the report reads in parts.

The panel, led by its Chairman, Justice Akin Oladimeji (rtd.), adopted the final written address forwarded by the petitioners’ counsel for recommendation to the government for appropriate compensation.