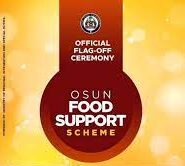 The government of the State of Osun, on Thursday, assured its citizens that increase in the prices of food items will not affect the quality of food components it is offering to vulnerable citizens through the Osun Food Support Scheme.

The government said it was aware that the prices of food items had significantly increased compared to when the scheme was flagged off on April 1, 2020, but assured that changing economic indices will not affect its commitment to citizens.

Recall that the government of the State of Osun started feeding 30,000 poor and vulnerable citizens across the State, with effect from the month of March 2021.

Speaking during the flag-off of the distribution of the sixth edition, the Head of the State’s Civil Service, Dr Festus Oyebade, reaffirmed that the administration of Governor Oyetola will continue to identify with those who are less privileged in the state.

“This particular programme is an initiative of the State Governor, Mr Adegboyega Oyetola, to identify with the less privileged in the society, those who are challenged or those who do not have. This is to encourage them and also assure them that the government feels for them, cares for them and will continue to support them.

“So far, 150,000 people have benefitted from this scheme, and another 30,000 will benefit from this current exercise. This will be sustained till the end of the current tenure of this administration.

“I want to assure citizens that we have a governor who keeps to his words. On this basis, whatever may be the cost of food items in the market, this programme will continue to maintain the standard it has set, and probably be improved upon in the days ahead. The quantity will not deplete as we continue to do the needful. The current prices of food items in the market will not affect the continuity or quality of this scheme.

“I also wish to call on citizens to support this present administration in all things that are essential for the progress of the entire State”, Oyebade said.

Also speaking at the flag-off, the Commissioner for Regional Integration and Special Duties, and Chairman of the Osun Food Support Scheme, Mr Olalekan Badmus, said the government was looking at the possibility of adding other components like Wheat to the regular Rice and Semovita that had been alternated over the previous editions.