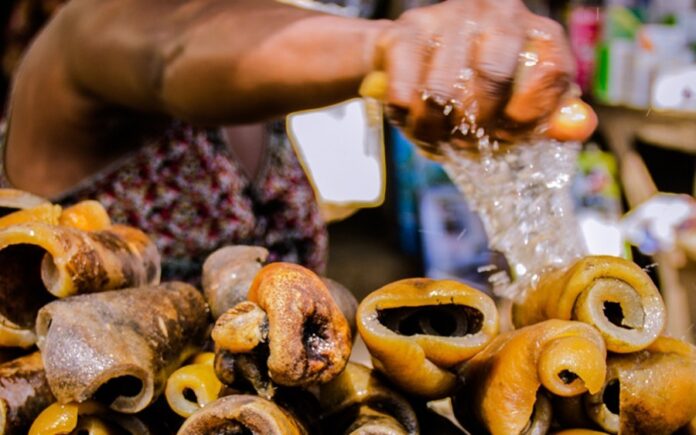 The Commissioner for Agriculture and Food Security, Hon. Adedayo Adewole has charged the Ponmo Dealers’ Association, Osun State Chapter to join forces with the Ministry of Agriculture to prevent importation of bad Ponmo into the state, especially the ones soaked with formaline disinfectants.

Hon. Adedayo gave the charge during the stakeholders meeting with Ponmo Dealers’ Association, Osun State chapter organised by the Department of Veterinary Services, Ministry of Agriculture and Food Security in Osogbo.

Hon. Adewole, who was represented by the Coordinating Director, Ministry of Agriculture, Mrs. Adegbemisola Fayoyin warned that there are some Ponmo available for sale in market places that are of questionable source and obviously not fit for human consumption.

She alerted that some are even spoilt during processing but still find their way into the markets.

Mrs. Adegbemisola disclosed further that there are some intruders in the business that are fond of importing them into the state which has to be stopped.

Speaking earlier, the Director of Veterinary Services, Dr, Mrs Abosede Olatokun appreciated the Ponmo Dealers’ Association for their quick response to government’s call. She further stated that the government is set to examine all the Ponmo Dealers in the state via the Association, not dealing with individuals.

Dr. (Mrs.) Olatokun stressed further that the meeting is aimed at organizing the Ponmo Dealers’Association in such a way that they would receive sufficient inspection as it is being done to Cattle and Butcher’s Associations. She also stated that the activity would assist the Public Health Department to perform their duties, adding that ponmo is a very common meat by-product and highly consumed in the State of Osun.

Also speaking, the Chairman of Ponmo Dealers’ Association, Alhaji Adebimpe appreciated the Commissioner and the organisers for calling the meeting, lamenting that there are lots of people in the state that do not care about the Ponmo that enters the state.

Alhaji Adebimpe also used the medium to state some of the challenges facing the Association and also called on the government to assist them.