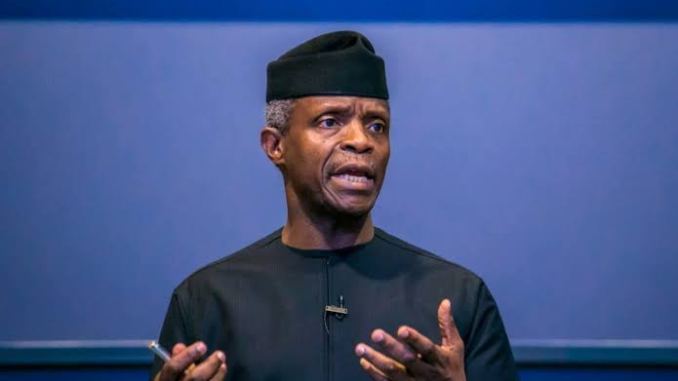 Vice President Yemi Osinbajo has called on State Houses of Assembly to speedily ratify the bill seeking total autonomy and devolution of powers to the Local Government Areas in the country.

The vice president made the call on Friday while delivering the “Distinguished Annual Lecture” of the National Institute for Policy and Strategic Studies (NIPPS), Kuru, near Jos.

The News Agency of Nigeria (NAN) reports that the lecture was titled ”Subnational Local Governance in Africa: Rethinking Policies, Frameworks and Institutions”.

Osinbajo, who was represented by Dr Chris Ngige, the Minister of Labour and Employment, said that local authorities play key roles towards nation building, but lamented that the third tier of government had over time been neglected and undervalued.

He maintained that the ongoing constitutional amendment seeking to allocate more powers to the local governments is a step in the right direction.

”While the roles of state governments and their scope of authority appear very well appreciated, local governments remain, in my view, quite undervalued, needing more attention from all of us, better funding, organisational and high quality leadership.

”As we speak, a bill for local government autonomy is striving hard to pass the threshold of 24 votes required from state Houses of Assembly, a key milestone towards its passage.

”I believe that efforts being made, through the ongoing constitutional amendment, to cede more responsibilities for control and management of resources to local governments across the country reflect our understanding of how crucial it has become for this tier of government to take full charge of their responsibilities and functions at optimal capacity.

”After all, it is often argued that local government is closest to the people and best placed to impact on their lives,” he said.

The vice president argued that local government fiscal autonomy would promote peace and security in country, adding that people at rural communities understand their terrain better and know how to deploy resources towards tackling security challenges.

He insisted that the yearning for local government autonomy is a step in the right direction and called on state assemblies to expedite actions toward ratifying the autonomy bill.

He added that the advantages that come with local government autonomy are obviously enormous, adding that it would further consolidate on Nigeria’s democratic system.

”Ratifying the bill that grants local governments fiscal autonomy in Nigeria is indeed a step in the right direction, and we encourage the yet-to-be decided voters from state assemblies to be considerate in this regard and speedily pass it.

”The issue of security for example which has posed significant challenge in the last decades cannot be effectively and consistently tackled with centralised security structure and resources.

”It is clear that Nigeria is too vast to be policed from the centre and the people at the grassroots know the intricacies of their communities better, they know the geography intimately, they understand the ebbs and flows of people and information in a greater deal.

”It is my firm belief that we must strengthen our sub-national administrative units via further devolution of powers and resources for effective performance,” he said.

The Emir of Kano, Alhaji Aminu Ado-Bayero, who chaired the occasion, said that there is a strong nexus between effective local governance and sustainable development, hence Nigeria should not be left behind in this paradigm shift.

He maintained that an effective local authority would address poverty, hunger, inequality, insecurity, illiteracy, among other challenges currently facing the nation.

Earlier, Prof Ayo Omotayo, the Director General of NIPPS, said the distinguished annual lecture was part of activities for the graduation ceremony of the institute’s Senior Executive Course (SEC) 44.