Benue State Governor, Samuel Ortom has directed the Ministry of Lands, Survey and Solid Minerals to hasten the process of issuing Certificate of Occupancy (C of O) to the  Nigerian Air Force, (NAF) Makurdi.

He commended the Chief of Air Staff for posting a son of the soil to the State, and described the Nigerian Air Force as a critical component in the security architecture of the nation and added that they have always lived up to expectations. 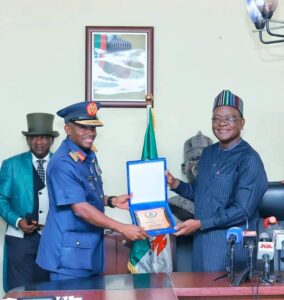 The Governor called on people of the state to support security agencies in the state and appealed to communities living around the Air Force Base, Makurdi not to encroach on the land that was allocated to the NAF based on the terms of settlement.

He assured the AOC of government’s support stressing that, “it is our duty to inform the people and protect them from what they do not know.”

Earlier, AVM Adole informed the Governor that the aim of his visit was to inform him of his posting to the state.

According to him, “It is customary for the AOC to pay homage to the Governor whose domain is the headquarters of TAC, having assumed Command as the 42nd AOC.

“I also use this opportunity to convey the goodwill and best wishes of the Chief of Air Staff, CAS to  His Excellency and the good people of Benue State.”

He disclosed that TAC will support the state in compliance with its mandate, pointing out that his leadership will give top priority to emerging security challenges especially in synergizing with other security agencies for the protection of lives and property.

The AOC said his predecessor briefed him about how supportive Governor Ortom had been to the Command especially intervening in the land dispute between TAC and Ugondo Community.

Adole appealed to the Governor to use his good office to prevail on the citizens to desist from encroaching into Nigeria Air Force NAF restricted land and temtones, Amour Dump 633 CAD and Airfield at Kwenev Community.

The AOC was  accompanied by top military officers including the Chief of Staff to the AOC, AVM PN Amadi and other senior officers of the command.