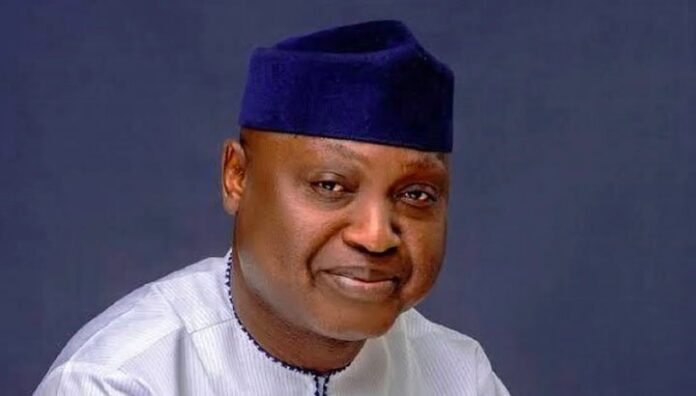 Gov. Biodun Oyebanji of Ekiti, says the Ondo Sea Port is expected to play a role in contributing significantly to developing the state’s economy and its neighbouring states.
Oyebanji who was represented by the Special Assistant (SA) to the governor on Budget and Planning, Mr Oyeniyi Adebayo, said this at the ongoing Nigeria Diaspora Investment Summit (NDIS).
It was reported that the event is organised by the Nigerians in the Diaspora Commision (NiDCOM) in partnership with Nigerian Diaspora Summit Initiative (NDSI).
The fifth edition of the NDIS holding at the Conference Center, Presidential Villa Abuja has as its theme: “Optimising Investment Opportunities for National Development “.
According to Oyenbaji, findings have shown that there is a positive relationship between seaport development and the growth and development of the local economy and neighboring communities.
“A significant ratio of Nigeria’s imports and exports rely on the maritime sector. Ports are the epicentre of the Blue Economy including transportation of humans and goods, export and import.
“Tourism and leisure, fishing, aquaculture, and more recent developments like offshore renewable energy, among others.
“Thus, Ondo Port is expected to play a role of utmost importance and contribute significantly to the development of the economy of Ondo state and neighbouring states such as Ekiti.
“As most (if not all of us) know, what is now referred to as Ekiti was part of the Ondo Province in Western Region of Nigeria.
“Ondo province would later become Ondo state in October 1976. 20 years down the line, precisely on Oct. 1, 1996, the modern Ekiti was formed out of Ondo state,” he said.
He further added that both states shared history and were economically and culturally closer than any of the 34 states of Nigeria.
“Hence, the establishment of a sea port in Ondo state will be of immense benefit to Ekiti . The importance of the proposed port becomes even clearer when one considers the fact that Ekiti is a landlocked state.
“Many investment potentials are expected to emerge and economic benefits are expected to be derived from the establishment of the Ondo seaport.”
He said the port would enable industrial outputs and agricultural produce in Ekiti to gain enhanced access to the international market and improve our ability to actively participate in the African Continental Free Trade Area (AFCFTA).
“Thereby generating foreign exchange. The port will also improve the economics of production and distribution of corporations in Ondo state and Ekiti and the general well being of the people of our two states,” he said.