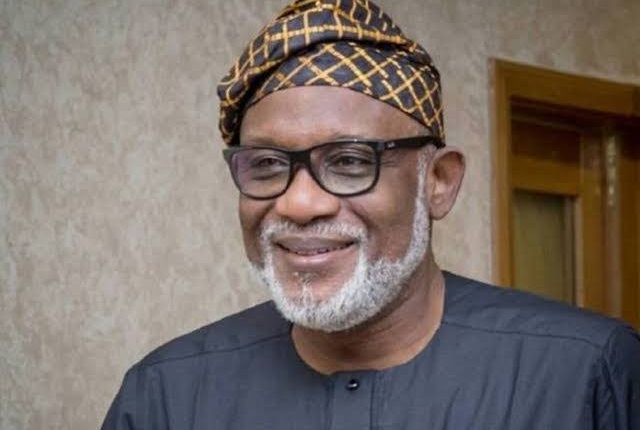 The Supreme Court sitting in Abuja, has dismissed the case of candidate of the Peoples Democratic Party (PDP), in the October 10, 2020 governorship election in Ondo state, Eyitayo Jegede challenging the reelection of Governor Oluwarotimi Akeredolu of the APC.

Four justices ruled in favour of Akeredolu out of seven. The apex court said Jegede, the PDP should have joined the Yobe State Governor, Mai Mala Buni in their case.

Recall that Jegede had earlier lost his case at the Election Petition Tribunal and the Appeal Court, seeking to nullify the nomination of Akeredolu as the candidate of the APC by the Governor of Yobe State, Mai Mala Buni, who is the Acting National Chairman of the party.

Governor Akeredolu, while reacting to the judgement, described the judgment as an act of God and thanked the judiciary for standing by the truth.

“For me, it is an opportunity again for us to get on board and do more work. My advice to Jegede is that, this has ended now. Let him come, let us work together, at least for the upliftment of Ondo State. I don’t doubt his love for the state. He has served here before as Attorney General for about Seven and half years.

“Let him come over, let us work together and work for this state. That is my advice to him. We don’t go any longer to the privy council. It has ended here,” he said.

The ruling party, APC while also reacting commended the Honourable Justices of the Supreme Court for a sound and faultless judgement on the state governorship election petition.

The party, in a statement made available to Nigerian NewsDirect in Akure by its State Publicity Secretary, Alex Kalejaye, shortly after the judgment, urged the Peoples Democratic Party (PDP) to appeal to the Privy Council of the United Kingdom, where the party and its governorship candidate take exception to the collapse of their petition.

The statement reads further, “the party is thrilled by the resolve of the apex court to uphold the decisions of the lower courts on the petition. The truth is always constant.

“The chapter rejoices with the Governor, Oluwarotimi Akeredolu, his deputy, Lucky Aiyedatiwa, and all the residents of the Sunshine State for this popular affirmation of the people’s mandate.

“The APC family expresses profound appreciation to all the parties and stakeholders, including the Independent National Electoral Commission (INEC), the legal teams, chieftains of the ruling party, and the electorate, for their contributions and support while the legal battle lasted.

“The party enjoins the Governor and his Deputy to put the legal gymnastics and distractions behind them, and focus on their selfless approach to governance, in the interest of every resident of the state, irrespective of party affiliations.

“While sympathizing with the PDP over internal crisis rocking the party, the Ondo APC challenges the PDP to reorganize itself so it could present a productive opposition to the performing government.”

Meanwhile, PDP has said the split judgment by the Supreme Court on the flawed nomination of Ondo state Governor Akeredolu, shows that there is merit in its appeal against his election as governor.

The party noted that the majority judgment as presented by the Supreme Court did not address the impunity in the action of the Yobe Governor, Mai Mala Buni, in functioning as the Chairman of the All APC while at the same time holding office as a sitting governor, contrary to the provisions of section 183 of the 1999 Constitution (as amended) as well as the constitution of the APC.

“The fact that three justices out of the seven-man panel upheld our position on the illegality of Akeredolu’s nomination confirms that his candidacy as cancerous and a brazen violation of the 1999 Constitution (as amended) as well as the constitution of the APC,” the party maintained.

The National Publicity Secretary of PDP, Kola Ologbondiyan  revealed that it is noteworthy that the judgment did not disagree with the position of the party that Mai Mala Buni as Governor of Yobe State cannot function as National Chairman of a political party and nominate a candidate for election to the Independent National Electoral Commission (INEC).

He opined that while the party restates its utmost respect for the institution of the judiciary, especially the Supreme Court, the PDP had expected the Apex Court to stand up as the conscience of the nation by halting the absurdities and impunities being entrench in the political firmament of the country by the APC.

“The quest for a legal pronouncement that will guide the sanctity of our electoral system was the reason the PDP had explored our point of grievance legally to the highest court in the land, in the interest of the nation, and not just because of our candidate, Eyitayo Jegede.

“The PDP however urges our members in Ondo state and Nigerians at large not to allow the development make them lose hope but to remain calm and law-abiding in the general interest of the nation.”