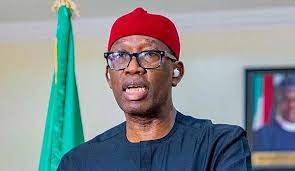 Gov. Ifeanyi Okowa of Delta and Vice-Presidential Candidate of Peoples Democratic Party (PDP) has congratulated Sen. Ademola Adeleke on his inauguration as the sixth  governor of Osun.

Okowa, in a statement issued by his Chief Press Secretary, Mr Olisa Ifeajika, on Monday in Asaba, described Adeleke’s emergence as “the entrance of light for Osun people.”

He prayed that his assumption of office would serve as a precursor for PDP to recover Nigeria from the current challenges.

The governor noted that Adeleke’s election signposted the reality of PDP’s determination to rescue Nigeria, adding that the mission was still on course.

“On behalf of the government and people of Delta, I congratulate you, my dear brother and friend, Sen. Ademola Adeleke, on your successful inauguration as Governor of Osun.

“It is heart-warming to witness your inauguration as the sixth governor of Osun against all odds and I am grateful to the electorate in Osun for shunning the entreaties of retrogressive forces.

“It is my prayer that God will grant you wisdom, knowledge and the needed resources to attend to your campaign promises of taking away the darkness that pervades your state, Osun,” he said.

He lauded Independent National Electoral Commission (INEC) for its commitment to improving election management in the country through the introduction of technology toward providing integrity in the electoral process and ensuring that it was credible.

“Let me also thank INEC for demonstrating true independence, as required by the laws of our land and for improving on the logistics and conduct of the election which heralded your emergence.

“As we go into the general elections in 2023, we urge INEC to further improve on the feat recorded in Osun so that the votes of anxious Nigerians can truly count for them,” he said.

Okowa also congratulated PDP and all its organs across the country for the addition of another state to its fold and called on all stakeholders to work in harmony to deliver all candidates of the party in the 2023 general elections.

According to him, if PDP can remain united, victory is assured, as the party is ready to give the ruling All Progressives Congress (APC) a good fight, come 2023.