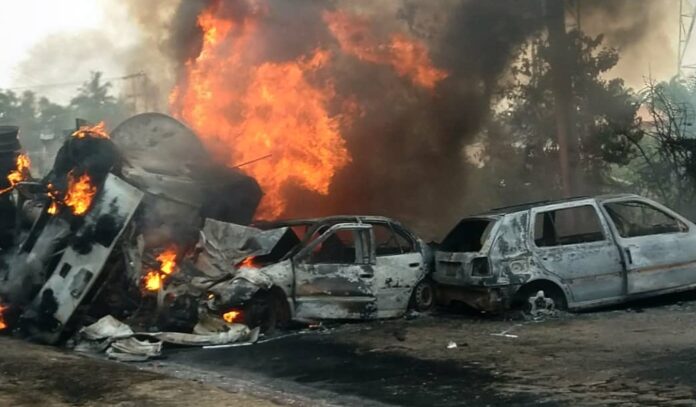 According to eyewitness, the incident occurred around few minutes past 8am and was caused by brake failure on the part of the tanker.

According to the eyewitness ,  the tanker, which was coming from the Kuto flyover  bridge experienced brake failure while descending  from the bridge, lost control and fell, thereby spilling its content on the road.

He confirmed that three people died in the incident while several others were injured,  saying that both the deceased and injured were taken to Federal Medical Center (FMC),Idi Aba, Abeokuta.

“The cause of the accident is still under investigation , we have to conduct thorough investigation , but it was an accident involving tanker loaded with Premium Motor Spirit (PMS) which fell and caught fire which affected other vehicles.

“Our men are still there with fire service to contain the fire and further spread of the fire,” he said.

Mr Femi Ogunbanwo, the State Commissioner for Special Duties,  who was at the scene of the incident,  said the state government would wait for report from necessary agencies before  appropriate response.

Ogunbanwo noted that the injured were going to be treated in the hospital at the state expense.

“The governor is aware of the incident.

We can not  attribute the accident to anything , we wait from appropriate agencies, ” he said.